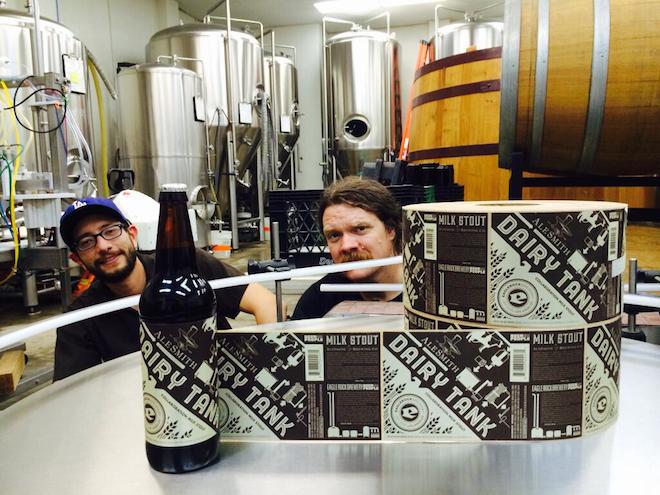 More and more craft beers are on their way from local SoCal breweries, and it’s a good thing, since it hasn’t exactly been feeling a lot like winter—let alone spring—around these parts.

Here’s a milkshake that will bring all the boys (and girls) to the yard: Dairy Tank, a new collaboration beer from San Diego’s famed AleSmith Brewing Co. and Eagle Rock Brewery. AleSmith—which just recently announced plans for a sizeable expansion that includes a long-awaited creamery to produce owner Peter Zien’s other artisan passion: cheese—sent some of its crew up to Eagle Rock to brew together, and Dairy Tank is their resulting liquid lovechild. Made in the style of a milk stout, this beer gets a creamy mouthfeel from the addition of lactose—aka milk sugar—and exhibits notes of “roasted malt, dark chocolate and a touch of sweetness on the finish.” The name and beer style play off of the converted dairy tanks that AleSmith used as a brewhouse for many years before selling them to Eagle Rock Brewery when they were getting started back in 2009.

Available for a limited time in 22-ounce bottles at better craft beer bottle shops, on tap around town, and Eagle Rock Brewery (where it is also available for growler fills).

Blue-Belly Barleywine is back again at Ladyface Ale Companie, and it is as big as ever! Barleywines aren’t shy creatures by nature, often putting malt, hops, and alcohol content into overdrive. (This fair lass weighs in at a hefty 10.8% alcohol by volume.) Flavor-wise, Blue-Belly carries a “bold toffee malt character[,] balanced with medium citrus and floral hop qualities, [and] soft hop pine resins” that creates “[a] strong ale finishing drier than expected with notes of leather and dried fruit.”

I’ve gotta give ‘em credit…Golden Road Brewing has been doing some serious dialing in on its beers. Brewmaster Jesse Houck and his crew have really improved both the quality and consistency of their suds in the past year. On top of that, they’re also expanding their core offerings with the release of the new and oh-so-refreshing 329 Days of Sun Lager. Fuller flavored ales are much more popular in the craft beer market, but light, crisp lagers are still the dominant beer style for larger macro-breweries. Still, there are a few local craft breweries that make exceptional lagers, and I’m delighted that we now have another to add to that list.

329 Days of Sun Lager, named after the average number of days of sunshine we get annually in L.A., is available year-round in 12-ounce cans and on tap at select locations, and for growler fills at Golden Road. >> Golden Road Brewing, 5410 W San Fernando Rd., Atwater Village, 213-373-4677.

Monkish Brewing Co. has created a small batch—only 50 cases—of Matrimonium, “a Belgianized Imperial Stout” made with a custom coffee blend by Portola Coffee Lab and lavender flowers. It was created with local friend of the beer industry Gev Kazanchyan for his upcoming marriage to Susie Jarakian. I was lucky enough to taste this 11.1% abv monster at Monkish Brewing’s 2nd Anniversary, and I can tell you that it’s one heck of a beer, full bodied and velvety, with an incredible balance of two flavors I love—coffee and lavender—that I don’t know I would’ve ever thought to put together.

(In the interest of disclosure, I want to mention that Gev and Susie are dear friends of mine, and Gev also puts on the awesome DioNicEss beer dinner series, which I’ve worked with him on, though strictly on a voluntary, unpaid basis.)