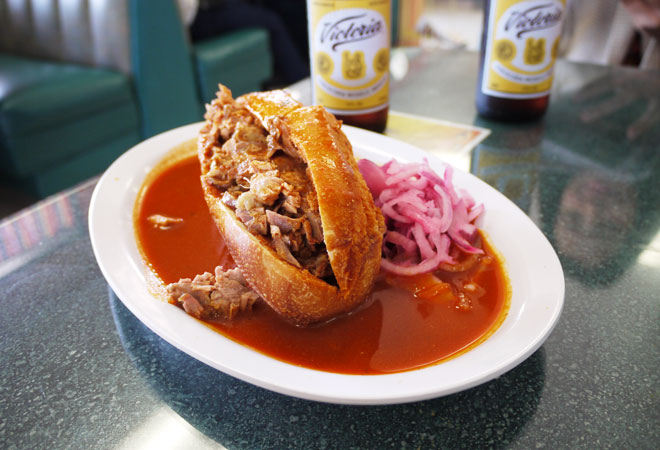 Los Angeles is becoming a tortas ahogadas kind of town. Guadalajara’s signature “drowned sandwiches” typically consist of of a spread of refried beans on a hard roll called a birote, or pan salado, usually filled with carnitas and then drowned in a lip, sinus, and throat-searing  Yahualica salsa, featuring the regional variety of chile de arbol from Yahualica, Jalisco chiles. Tortas ahogadas restaurants  and stands—there’s even a truck—have multiplied over the last five years. To boot, there are now several reliable bread makers and the essential Yahualica chiles are easier to come by at Mexican markets.

Tortas Ahogadas Guadalajara is located in Huntington Park strip mall flanked by a pair of excellent Latin-American restaurants—one Honduran and one Colombian. The joint serves tasty, traditional Guadalajara cuisine such as tacos dorados (Mexican crunchy tacos), tostadas of pig’s feet and skin, carne en su jugo (beef in its own juices), and of course tortas ahogadas.

You can order the traditional drowned sandwich—mild or spicy—or try the shrimp torta ahogada in a creamy tomato-chipotle sauce fashioned after a famous torteria in Guadalajara called La Gemma. The epic dish consists of a smear of refried beans, some slender pickled red onions, and a fistful of tender, luscious carnitas stuffed in a hard roll, the whole thing bathed in a pool of persimmon-red salsa. Take the end of the sandwich, dredge it through the sauce to permeate the exposed meat, take a bite—repeat.

The torta ahogada is the finest Mexican sandwich tradition we have in L.A., and it’s the perfect way to let the long hot summer sweat through your pours just before a cooling swig of ice-cold Victoria beer, the Tapatio (people from Guadalajara) way.

The Best Places to Get a Cup of Café de Olla in L.A.