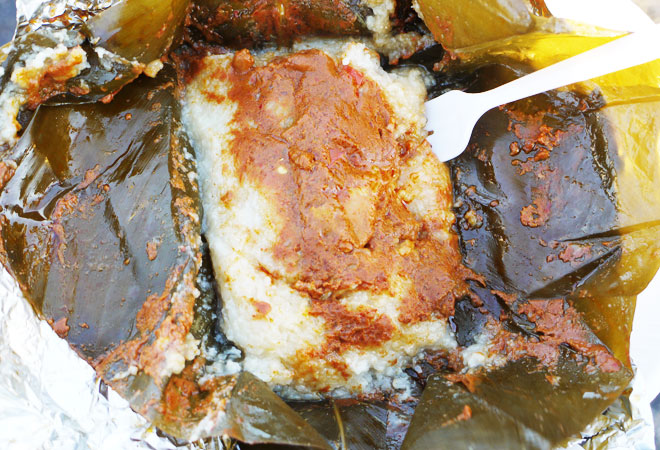 When Jimmy Webb lamented that he’d “never have that recipe again” in his song “MacArthur Park”—first recorded in 1968 by Richard Harris, and ultimately made famous by Donna’s Summer’s 1978 disco version—I’m pretty sure he didn’t have tamales de arroz in mind.

Since waves of Guatemalans and Salvadorans fleeing horrific civil wars descended upon Westlake’s MacArthur Park in the early ‘80s, the Park has become a nerve center for Central American cuisine. Guatemalan street vendors rule the streets between the park and the Metro station and along Alvarado between 7th and 8th streets. On weekday evenings and weekend mornings you’ll find a variety of Guatemalan tamales made from corn masa, potato—called paches—and rice.

Tamales de arroz quetzaltecos, or rice tamales from Quezaltenango—an indigenous cultural center of Guatemala—consist of a masa that’s a mixture of corn masa and broken rice. They’re filled with a recado, which is a stew of tomatoes, mild Guatemalan chiles (guaques), toasted seeds, vegetables, and meat—it’s usually pork in the Park. (Did I just say that?)

The boiled tamales are traditionally wrapped in maxán (Calathea lutea) leaves, and wrapped in natural twine made from tule, called cibaque, but on Alvarado banana leaves will likely be the common substitute.

The rice subtly firms up the tamal and tones down the corn flavor, while that mouthwatering stewed meat seeps into the flavorful masa. Look for the shopping carts with a pair of coolers, one to keep the tamales warm, and another for the atole ( thickened corn drink). Your best bet is on the corners of 7th  and  Alvarado and 8th and Alvarado for a rare taste of Guatemalan street food.

Tamales de Arroz Quetzaltecos
Various vendors
Weekdays after 5 p.m. on Alvarado/8th
Weekends on Alvarado between 7th and 8th, and around MacArthur Park