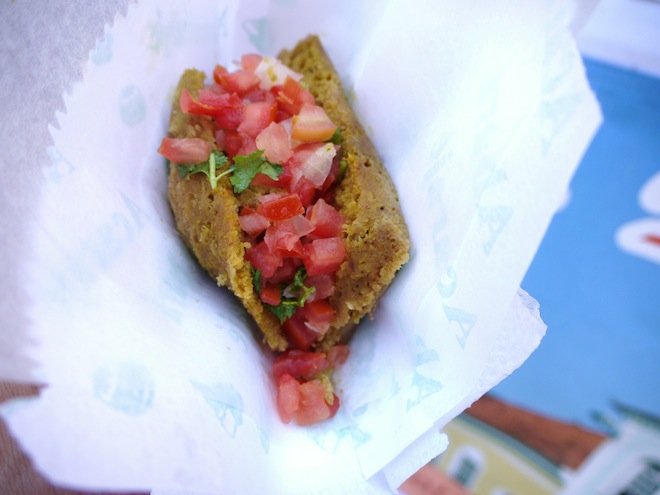 Every Brazil Day, several former Brazilian restaurants that now survive as catering operations come out to give L.A. a taste of Brazil. Sabor da Bahia has been a mainstay of the festival with their provincial dishes from the state of Bahia. We’re still waiting for partners Renilda Flores and Ilma to open a restaurant!

One dish I enjoyed at the recent festival was abará, a Brazilian-style tamal of steamed black-eyed peas—black eyes removed—with beta-carotene rich dendê oil. The ladies then dress it with vatapá (shrimp paste), and a cooling tomato salad instead of the traditional dried shrimp.

Regional Brazilian cuisine has struggled here in Los Angeles due to the economy, undercapitalized businesses, and a relatively small Brazilian community. That traditional ingredients are expensive also doesn’t help matters. Support the chefs behind Sabor da Bahia and other small operations by checking out events in the Brazilian Community. You can also order abará directly for pick up—in case you find yourself deficient in this particular Essential T. Either way, I’ll see you at next year’s Brazil Day L.A., where a taste of Bahia comes with samba dancers.