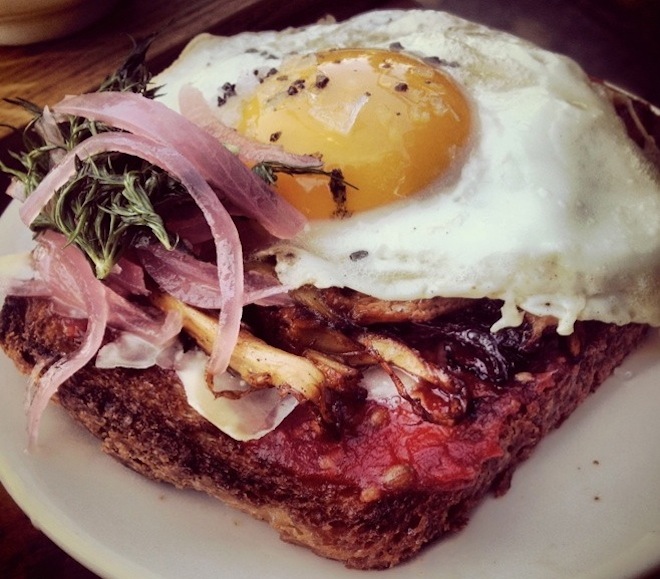 Ever since FoodGPS’ Josh Lurie took me to SQIRL—an artisan jam production facility-cum-café in Silver Lake—I was quite taken with the flavors I came away with, both from the food and from the ridiculous espresso epiphany I had at the hands of G&B Coffee, which is thankfully enjoying an extended pop-up stay under the SQIRL roof.

Returning again like a plump prodigal son, I couldn’t wait for another dose of what may be some of the most soul-satisfying food in Los Angeles. The small and relatively unadorned space would never lead you to predict that you were in for such a treat, but a glimpse at the size of the Sunday morning line and the smiles on the faces on diners braving the chill outside will instantly tell you that something is definitely up here.

SQIRL is a mishmash of the words girl and squirrel, as in “a girl who squirrels” according to owner Jessica Koslow, who began making a name for herself with the remarkable jams and preserves she made that could, yes, be squirreled away. (Though a jar of her wild blueberry-tarragon jam never lasts more than a few days in my casa.) Last October, she—along with Ria Wilson (formerly of Canelé) and the G&B Coffee duo Kyle Glanville and Charles Babinski—expanded her food preservation wizardry into the full-blown menu that exists today. A stark sandwich board sign outside with an arrow pointing toward the doorway reads “Toast & Coffee”, a humble description if I’ve ever read one.  But a glance at the decidedly more verbose chalkboard menu inside tells a very different story, offering a number of dishes that all sound so much like a culinary adventure I’m beyond excited to go on, it’s almost paralyzing having to choose just one. Which is of course why, after devouring my Kukuho Rose brown rice bowl—harmoniously crafted with carrot-top pesto, preserved Meyer lemon, lacto-fermented hot sauce, watermelon radish, dill, and a poached egg—I rushed back inside to order something else despite being entirely too full. (As the wise and omniscient Louis CK once said of his own eating habits: “The meal is not over when I’m full; the meal is over when I hate myself.”)

After staring quizzically at that sign for so long, I knew it was time to do this toast and coffee thing. So I got a small carafe made from the recommended Kenyan Kiawamururu beans and began surveying the toast options. Made from nearby Proof Bakery‘s brioche, SQIRL’s toast is somehow divine, exhibiting a perfectly crunchy exterior that still yields to even the most delicate bite. While the purist may wish to enjoy it simply slathered with a schmear of any of Koslow’s jams (Santa Rosa plum maybe?) or freshly milled nut butters, I opted to go with the deluxe model, topped with tomato chutney, wild chanterelle mushrooms, Capricious goat cheese, dill, pickled onions, and an egg fried to perfection. She smiled when she put it down at my curbside “table” (a crate of sorts positioned on the sidewalk next to my chair) and said, “You’re going to like this one.” Good god was she right.

I’m not going to lie; over the course of my two visits (and you can believe there will be many more), I’ve developed a huge food crush on Koslow. She brings out an ingredient’s nuances that hadn’t ever before made themselves known to me, and probably dreams in colors I’ve never seen. There is true beauty in her food, combining seemingly simple ingredients into complex and calculated dishes that still somehow retain a simple feel. Even Papa J-Gold took notice, naming her “plain yet magnificent” toast and jam preparations one of his top 10 picks of 2012. Watching her move in the kitchen—checking on baked goods in the oven, straining the pulp out of housemade almond milk, finishing dishes with huge flakes of salt that pop beautifully when bitten into with your runny egg yolk—you get a sense of her passion and drive. Catching her laugh at something Ria’s just said to her while she’s busy whipping something up in the muted pink Kitchen-Aid stand mixer or say “See you tomorrow!” to an obvious regular, and you’re delighted to find that she’s as genuine and kind as she is serious about her toast and coffee.