Home Uncategorized Tips to Surviving Tales of the Cocktail 2012 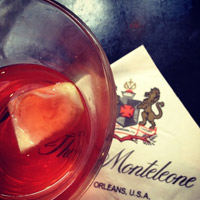 If your liver isn’t bemoaning the misfortune of being anchored to your body…
If you can remember with clarity the concoctions you drank…
If you’re not even a little tore up…
…you’re doing Tales of the Cocktail wrong.

Held every summer in New Orleans during the kind of heat that inspires pragmatic butchers to rent out their meat lockers as pied-à-terres, this annual boozefest is, theoretically, a celebration of the cocktail. Its craft, its artistry, its socio-political ramifications. More viscerally, its power to intoxicate. The six-day fete is a much needed reminder of the pleasures of release – or at least it ought to be. (Try hosting a bona fide Dionysian bacchanal in the Instagram era.) Practically speaking, that means you’ll hear the word “spirit” more often than at a high school cheerleading competition. It also means you get to drink and schmooze with some of the best bartenders in the country. If you live in Los Angeles, you can do that anyway, pretty much any night of the week. In New Orleans during Tales, you can do it outside the deeply uncool strictures of a fee-for-services transaction. Here are some survival tips:

Founded by Ann and Paul Tuennerman, aka Mrs. And Mr. Cocktail, Tales of the Cocktail marked its tenth anniversary this year. Every two-bit boozehound, blogger, and liquor rep came out of the woodwork. The festival is already at critical mass, jampacked with so many seminars, tasting rooms, happy hours, and special events you’d need a holographic twin to attend even half of them. And it keeps growing. Go now. In another five years, Tales may be as unbearably crowded as Comic Con.

Just as a good one will bring you life, a false one will suck it from you. Amid all the boozing, Tales of the Cocktail offers amazing opportunities to learn about all manner of obscure alcohol-related topics. There is an art to poring over the catalog and separating the noteworthy seminars from the glorified 90-minute shill sessions. At The Drunken Botanist, science writer Amy Stewart offered a fascinating chronicle of all the illegal, immoral, deadly, and dangerous plants that have made it into the stuff we imbibe. The Pisco Wars, a distillation of the conflict between Chile and Peru over which country invented the grape liquor, was supposed to be fantastic, and we were sad to miss Drinking the Panama Canal, Dave Wondrich and Jeff Berry’s seminar about the “scandalous” history of Panamanian booze. In A Tale of Three Cities, Simon Ford made a compelling case that San Francisco, London and Melbourne, were the harbingers of today’s global cocktail culture.

The official drink of New Orleans, the Sazerac is generally a mix of rye, absinthe, bitters and simple syrup. At the Carousel Bar at the Hotel Monteleone (headquarters for Tales), it’s Robitussin red and adorned with a curl of lemon peel. Rye is the base for the modern Sazerac, but don’t turn up your nose at one made with brandy. It’s a traditional New Orleans preparation that harkens back to an era when Cognac had yet to be supplanted by whisky.

In New Orleans, even the winos and bums are gentlemen. At Saturday’s Pig & Punch shindig thrown by the Bon Vivants in Washington Square Park, it was come one, come all. Residents of the neighborhood queued up alongside bartenders and drinkers from around the world, while a pig, its skin black and crackling, roasted on a spit. As we were waiting for a ladle from one of the half-a-dozen garbage cans filled with punch, a local bum who hit the front of the line at the same time politely slurred, “Ladies first, ma’am. I know how to be a gentleman.”

A huge congrats to Cedd Moses, Eric Alperin, Chris Bostwick, Devon Tarby, and the rest of the crew at The Varnish, which on Saturday night won Best American Cocktail Bar at the Spirited Awards. The honor is well deserved, though the celebrated bar-within-a-bar hardly needs another feather in its overstuffed cap. A handful of other Los Angeles watering holes—La Descarga, Harvard & Stone, Seven Grand, Rivera, the Spare Room at the Roosevelt—received nominations in at least one of the 17 categories. Alperin and Vincenzo Marianella (Copa d’Oro) were also nominated for American Bartender of the Year.

On that note, a few thoughts about awards shows. They’re long. They’re boring. They’re unbearable without Tivo. This is especially true of Tales, where they stretched out over three hours. (Those who didn’t have tickets could watch a live webcast.) Plenty of attendees will tell you the same thing—off the record—including many bartenders who skipped out early to attend Juniperlooza, the last official blowout of the festival. Also, the Spirited Awards are an expensive popularity contest. They should be viewed with great skepticism. Winning is on par with being named president of your seventh grade class. In other words, they’re still better than the Golden Globes.