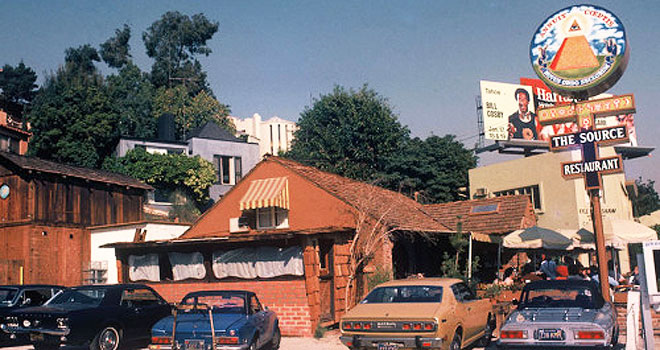 In 1969, Jim Baker—aka Father Yod—the white-robed leader of a Los Feliz-based group of spiritual seekers known as the Source Family, opened one of the nation’s first vegetarian restaurants at Sweetzer and Sunset. It is here that in his movie Annie Hall, Woody Allen famously orders “alfalfa sprouts and a plate of mashed yeast.” The 100 young men and women—all of whom were given the name “Aquarian”—lived a utopian lifestyle that, along with a meat-free diet, included plenty of meditation, marijuana smoking, and tantric sex. All that’s enough to make even the most ascetic hippy mighty hungry.

This week marks the L.A. premier of a new documentary, The Source Family, which profiles the mysterious L.A. group. The first sold-out screening takes place at West Hollywood’s Standard Hotel this Thursday, and will be followed by a reception featuring dishes from the original Source restaurant. Questionably delicious but definitely nutritious, the early Source dishes defined the taste of vegetarianism for decades, giving rise to the prolific use of things like alfalfa sprouts and carob. For the film’s premier reception, chefs will stay true to the restaurant’s original recipes for everything from  a “magic mushroom” salad to a carob cheesecake to a simple mushroom barley soup. Using just a few basic “whole” ingredients, the 44-year-old soup feels surprisingly current—even if we’re not sure how health nuts today would feel about all the sour cream and butter. We like it just fine.

Directions:
Lightly sauté celery, onion and mushrooms with olive oil, butter and garlic, then add to barley in large soup pot with 12 cups water, cook over medium heat until barley is soft, remove from heat and stir in sour cream.

The Source Family documentary screens at Cinefamily through May 16.