Home Uncategorized This Roast Beef Has Been Around the Block 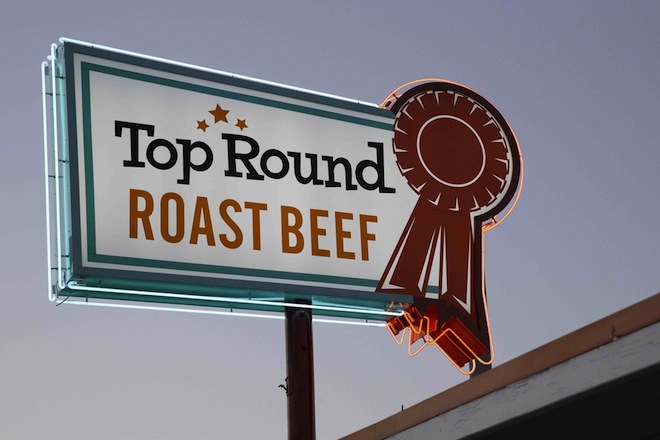 Photograph courtesy of Top Round

Chicago slings the Italian beef, Western New York has the beef on weck, and here in L.A, we swear by the French dip. The roast beef sandwich is found in dozens of cities across the U.S. but no one has ever tried to enlighten us with a scalable, chef-driven version. Until now. Today, Top Round Roast Beef opens on the corner of Olympic and La Brea, in a former donut shop, and the restaurant world is abuzz with news of the unique partnership behind this new concept.

Top Round comes to us courtesy of chef 800 Degrees‘ Anthony Carron and Red Medicine’s Noah Ellis. Though the two partner with Umami Restaurant Group’s Adam Fleischman in their individual projects, Fleischman is not a partner in Top Round (“He’s been very supportive,” says Carron).  Instead, Steven Fretz (Curtis Stone group), and Jamie Tiampo (an investor in several New York-based restaurants) are on board to help with everything from concept to execution and financing. Almost instantly we wondered: why would Carron, who’s about to go big with pizza, get busy with beef?

Ellis tells us that a couple of years ago he was having tacos at the El Chato truck with Carron and the two scribbled the idea on the back of a napkin. “We wanted to do something together and we wanted to do something we knew we could do well. We were thinking that an old donut shop or deli would make the best location, and we looked across the street and saw Bee’s and realized that it was the perfect spot,” says Ellis. “And then Anthony just took care of it [the lease] and we’ve been remodeling it for the past few months.”

But why roast beef? “There’s been this whole ‘battle of the better burger’ going on in L.A. lately and we’re just moving past it. I grew up in Boston, where we have a roast beef sandwich, and there’s the French dip in L.A. and every city has it’s own version. But we’re not copying anyone’s roast beef sandwich, we just want to make a really good one.” Ellis says that they’re modeling operations after In-N-Out, “in that it’s a limited menu, with really high standards for quality, and we’re focused on just one product.”

Sounds like the pair are thinking big. Carron says that Top Round has been started as a concept that can easily be multiplied across the country. But he’s realistic too. “The first step is that people have to like it.”