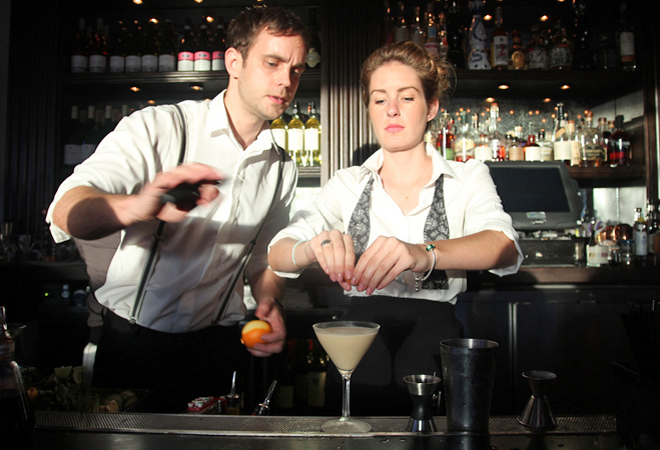 When a new restaurant wants to make an impression in L.A. sometimes being the fanciest vegan eatery with an Oprah-approved chef just doesn’t seem like enough. Quality craft cocktails helps lots…says the girl whose hobby is drinking. Initially for its March opening, Chef Tal Ronnen’s Crossroads had world-renowned mixologist Gaston Martinez create the drinks. But starting this month and going forward, the restaurant put barman Jeremy Lake (Rivera and recently closed Playa), who helped open Crossroads, in charge of the cocktail program.

Jeremy has trained and worked with mixologist Julian Cox (Rivera, Bestia, Sotto) for three years and Crossroads is his first solo project. Unlike in Rivera where Julian gets final say before any cocktail makes it onto the menu, at Crossroads Jeremy will “for better or worse, release my recipes as they are.”

They won’t differ too much from what cocktail geeks have learned to expect and love from the Cox cocktails. “It’s not like I’m going to set my Manhattans on fire,” joked Jeremy. But he will “take the tools that Julian has taught me over the last three years working for his programs and extend off of that with my own thoughts and my own ideas, and maybe tweaking recipes in ways that more fit my palate and get to experiment and have fun with that.” He says that the differences will be miniscule, like measurements miniscule, oh and that everything will also be vegan-friendly.

Yup, no honey, egg whites or any ol’ sugar in these craft cocktails. Vegans can imbibe comfortably with the knowledge that Jeremy, although not a vegan himself, has researched every ingredient and ran the drinks by Chef Tal.

But the barman says it’s been, and continues to be, a learning experience. “Instead of honey, you can use agave or simple syrup made from sugars that are processed in ways that don’t use animal products. But as far as finding an exact substitute to honey, I haven’t found one yet. But I’m just scratching the surface on all of this so maybe eventually we’ll get to that.”

Would Jeremy ever consider becoming a vegan/vegetarian himself? “I respect it a lot. I also respect a well-done steak. But what I do take from this is being that much more conscious of understanding where my food is sourced from. I’ve become a foodie whether I like it or not. It’s happened.”

Here are some of the drinks off Jeremy’s new menu which serves to complement Chef Tal’s Mediterranean-inspired dishes.

Sophia: Alipus mezcal, tequila blanco, lime, grapefruit, Kalamata syrup. “What makes it cool and special is that we’re using kalamata olive syrup. That’s a really funky drink. If people are going to be adventurous they should try that one. It’s earthy, it’s smokey, it’s briny.”

Casa Blanca: Vodka, lemon juice, hellfire bitters, harissa powder. “It’s served up, it’s got a little bit of warmth to it, a little spice. It’s a riff on a popular drink called London Razor Blade, a gin-based cocktail with cayenne pepper over the top. I just used spices more in theme with the restaurant.”

Mayflower: Pimm’s No 1, Plymouth gin, St. Peters English Ale, Campari, orange, cucumber, mint, lemon. “Riff on a Pimm’s Cup but it’s also a beer cocktail and a tip of the hat to the English and their long history of imperialism. Nice aperitivo.”

Sparkling Kitty: Sangiovese wine, cava, lime, housemade ginger syrup. “A Kitty cocktail is like a Moscow Mule but with wine. I have a feeling that it could stick around for awhile because we are a wine-centric program ”

Buoys and Birds: Monkey Shoulder Triple Malt Scotch, cucumber, mint, lime, atomized Islay scotch. “What makes this fun and unique is that I’m using a triple malt scotch, a blended scotch but it’s a blend of only single malts, and then I’m atomizing Islay scotch over the top so you get that really peaty smoky smell.”