Home Uncategorized The Seven Things You Need to Know About Melrose Umbrella Co. 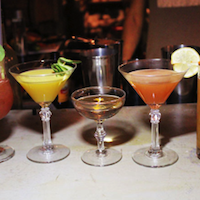 Walk by Melrose Umbrella Co., which is taking over the space on Melrose that used to house The Foundry by Eric Greenspan, and you’ll see people trying to get a peek inside. They’re knocking on the doors and asking anyone nearby if the place is open. Recently some folks even insisted that there was a birthday party in there that they were invited to—just to get a look at the new bar. But co-owners Austin Melrose and Zachary Patterson are being coy and simply telling the curious, “We open at the end of the month.”

I can’t blame the lookieloos. Everything from the design to the cockails makes me want to be a regular here when it opens next week. With the high vaulted ceilings and exposed Douglas Fir wood beams circa 1936, this bar looks nothing like The Foundry. It’s brighter, more spacious, and warm with candlelight. Lavender, chocolate mint, and potted Meyer lemon and clementine trees provide greenery as well as fresh ingredients for cocktails. The old service window for the Foundry’s kitchen is now a separate mini bar that Zach says is reserved for their more involved cocktails.

Alas the outdoor patio out back isn’t part of this space; it “belongs to the tenant next door.” I’m assuming that will be part of Greenspan’s forthcoming grilled cheese eatery.

For those wondering where the bar gets its name—an odd reference given our location in sunny Los Angeles—Zach explained, “An umbrella with rain falling from the inside is a symbol for post-Prohibition and it meant ‘Many wet days to come.’ During Prohibition, the umbrella held up meant ‘Keep Vermont dry’ or whatever. It was the Temperance movement’s symbol.”

The building’s original use and design—which was found after the drywall was torn away to reveal what Umbella Co. bar designer Matt Winter called the most beautiful thing he’s ever seen–inspired the bar’s post-Prohibition theme. “This was built in 1936. Prohibition ended in 1933, so it made sense to be like, OK, let’s make this a post-Prohibition cocktail bar. We’re not a speakeasy. No way. Let’s open the doors all the way. Let’s make it bright in here!” said Zach.

The cocktail menu itself will consist of pre-, post- and Prohibition cocktails as well as goodies from contributing bartenders, including Julian Cox, Josh Goldman, and more.

But that’s not the only cool thing about this new drinking hole. Here are seven intriguing facts that will have you joining the lookieloos out front.

① There will be five beers and five cocktails on draft. Since this will be a bartender’s hang in addition to a neighborhood bar, there will be Fernet on draft, “to do Vesper Bombs by Chris Hopkins over at the Vesper Bar at the Cosmopolitan in Las Vegas” as well as a Pisco Punch by Paul Sanguinetti (Ray’s and Stark Bar) and a mezcal-Green Chartreuse shot made (in)famous by Alex Straus (formerly of Hemingway’s in Hollywood).

② This is the only bar outside Oregon with Deschutes Abyss Imperial Stout on tap: Yes, craft beer fans, since co-owners Austin and Zach are from Bend, Oregon, and have an in with Deschutes Brewery [Zach’s dad is friends with Deschutes Brewery founder Gary Fish] up there, Melrose Umbrella Co. is now the only account outside of Oregon that has Deschutes Abyss Imperial Stout on draft. “There are two kegs left this season and we got them,” said Zach. “We’ll carry that indefinitely. We’re two Bend boys, we love Deschutes. We’re going to get all the exciting stuff that can’t leave Oregon for the most part.”

④ Every Tuesday, there will be live music. And thanks to co-owner Ian Shepp’s experience of having owned the Key Club on the Sunset Strip, they have an amazing sound system that’s plugged in for a DJ setup. “And when the piano plays you feel it throughout the whole space.” To kick off the opening weeks, Brother Sal, who has a regular gig at the Piano Bar in Hollywood but hasn’t performed solo for several years, will command the corner piano every Tuesday.

⑤ In the classics section of the cocktail menu, the drinks will be inspired by a different classic cocktail book every season. The bartenders will read the book together and pick which cocktail they want to create a variation of. “In fact it could turn into a book club. So if anyone else in L.A. running programs wants to be on board with the book maybe we’ll have a monthly discuss, talk about our favorite drinks, all come in here and R&D them and whoever does the best take on the classics that we all agree on we’ll throw on the menu,” explained Zach.

⑥ This bar wants to embrace the neighborhood. “I want the neighborhood to have a voice with what we’re doing because ideally we’re going to be a neighborhood bar,” said Zach. And instead of overwhelming the neighborhoodies with an epic cocktail list right off the bat, Zach and company will present a small menu of five house cocktails and three classics that change weekly. “So for the next six weeks we’re going to have a different five, a different three and ease into it. And we’re going to be receptive of what everyone is enjoying. So if we start seeing, ‘Oh everyone loves that drink,’ that’ll carry off to when we actual volumize and have the sections outlined.” The final product will be about 30 cocktails long.

“Apothecary” will include cocktails made with housemade cordials, tinctures, bitters, and infusions.
“Classic” will spotlight the favorite cocktails from the monthly bartenders’ book club as well as classics.
“Seasonal” cocktails, self-explanatory.
“Tiki” drinks since “Tiki is so native to L.A. We’ve got a couple of blender stations set up so we’ll do blended Tiki cocktails. And right now you see Zombies popping up all over town.”
“The Modernist” section is where the bartenders geek out, doing things like vodka strawberry sorbet, tableside smoked cocktails and Cryovac-involved libations. There will only be a set amount of these cocktails available every day, “So as soon as we’re out of that, we’re out of that,” said Zach.

⑦ Look forward to a unique bottle program and coffee service. Even though the co-owners are still mum about the details, Zach did hint, “It’s not like any bottle service you’ve seen before.” As for the coffee program, which they were super mysterious about, “that’s coming in a few months.”

So when can you get in? The co-owners say they are planning to open next Tuesday, but since it’s still not 100 percent ready yet, they have to say “end of the month.” We’re keeping our eyes peeled.