Home Uncategorized The Next Big Cuisine to Watch? Brazilian 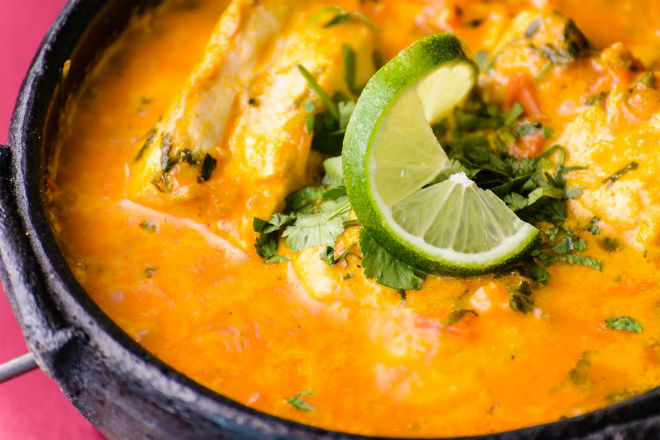 The spotlight is on Brazil—and its rich cuisine—as soccer fanatics around the world pack their bags for the 2014 FIFA World Cup, and sports lovers book hotel rooms for the 2016 summer Olympics. Carnaval 2014 arrives at the end of February, too. There’s even a celebrity chef component: Sao Paulo-based chef Alex Atala of D.O.M. makes headlines wherever he goes. I’m calling it: Brazilian cuisine will be the next big thing (sorry Peru).

Yesterday, I was thinking about all the exciting things happening in Brazilian cuisine while enjoying Bahia-style moqueca, a northeastern Brazilian seafood stew (especially revered in the states of Bahia and Espiritu Santo) on the popular Flamengo Beach in Salvador da Bahia, Brazil. I was thinking about how it could still be a while before we get some solid regional Brazilian cuisine in L.A… And then I remembered Moqueca in Oxnard, a place I visited in its inaugural month back in December of 2008. It is perhaps one of the best regional Brazilian restaurants in the U.S.

Chef Tatiana Faveretto, from Vitória, Espiritu Santo, Brazil, has been serving genuine moqueca capixaba (Espiritu Santo-style) for the last five years in this sleepy L.A. suburb. It’s presented in traditional clay pots imported by her mother-in-law, and owner of Moqueca in Maria-Gloria Sarcinelli.

If you want a sense of the hype surrounding Atala’s likely ascent to the Pellegrino 50’s number one spot (he’s currently number five), Moqueca is the only place to go for regional Brazilian cuisine close to L.A. And, if you can’t spring for the tickets to Brazil in the next couple of years,—believe it or not—Oxnard is your next best bet.