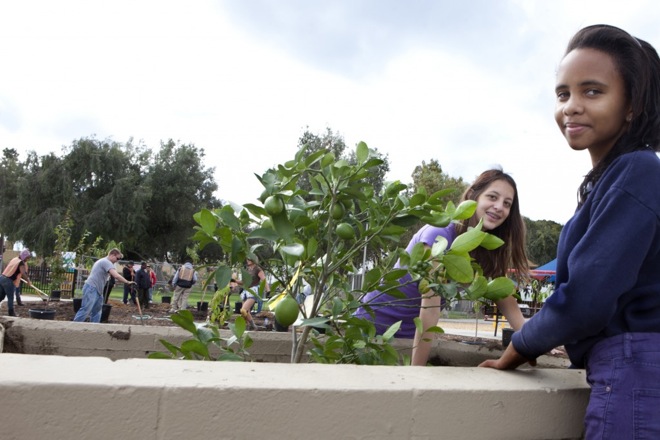 The Del Aire Fruit Park is indeed one of a kind, described as “a ground-breaking civic art commission designed to provide the community with an urban orchard that will be sustained, nurtured, and harvested by the public.”

Really? The first? There aren’t any other parks in the state with fruit trees from which the public can pick? Apparently not. A recent KCET article reveals that “[f]ruit trees are neither sanctioned for planting in L.A.’s public parks and streets, nor for planting in public land in most cities in the United States.” It then goes on to explain:

“The legal basis for the prohibition lies instead with the doctrine of attractive nuisance: a tort in common law by which a landowner may be liable for injuries inflicted on an ‘infant trespasser’ by an object or condition appealing to a child, when the landowner could reasonably foresee the potential danger. Examples include: an unfenced swimming pool, a cute-looking dog with a propensity to bite, and, apparently, a fruit-laden tree.”

Other questions arose during the planning for this park—including several from the L.A. Department of Parks and Recreation Deputy Director, Joe Mendoza—along the lines of whether or not people will know when to pick the fruit, will they know what to do with it, and what would happen if it turned out that nobody in fact wanted it. But the groups were able to work together to try this out as a pilot project.

While still young, Fallen Fruit hopes that the blend of trees—avocado, apple, lemon, lime, loquat, peach, plum, passionfruit, nectarine, orange, apricot, fig, persimmon, pomegranate, plus some grape vines—will serve “as a call to other neighborhoods and residents of communities across the Los Angeles County to plant their own public fruit trees and change the way our city is experienced.”

The story of opening the Del Aire Fruit Park, and the challenges it faced as outlined in the KCET article referenced above, may be turned into a short video documentary if it garners enough votes in an online ballot currently open at the KCET Artbound webpage.