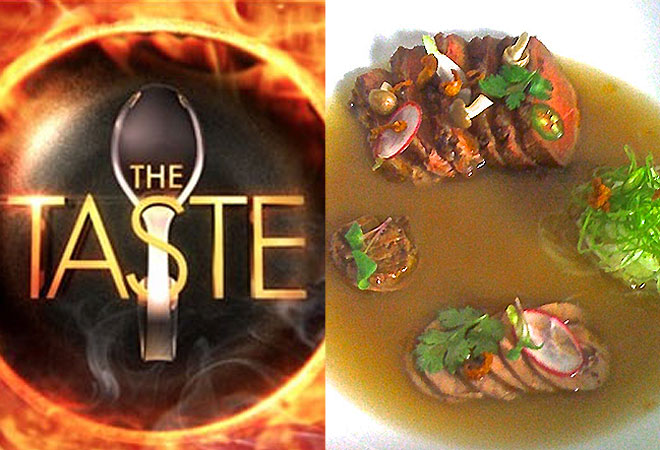 Months before the contestants on ABC’s The Taste (airs tomorrow at 8 p.m. PST) began loading-up spoons for Ludo, Bourdain, Nigella, and Malarkey, they had to please me. Yes, I was lucky enough to participate in the show’s first-round auditions as a professional taster—on the front lines of choosing the show’s culinary hopefuls. The early tryouts took place last summer in L.A., Chicago, and New York, and I was selected to be the primary tasting judge at the Big Apple auditions.

There were many memorable dishes—some for good reasons, some for very, very bad ones—but there was one cook who stood out in particular: culinary instructor and former Le Bernardin saucier, Gregg Drusinsky. On the show, our hometown pop-up pioneer Ludo Lefevre was dazzled by Drusinsky’s spoonful of Singapore-style lobster with coconut milk and curry paste, and drafted the culinary instructor for his team.

At the New York tryouts, the dish Drusinsky presented was a stellar play on the Vietnamese comfort mainstay, pho. The twist: He worked foie gras into the bowl and dubbed it “pho gras.” Phobulous! At the time, California had just passed its ban on fatty duck liver, so I was eager to devour what might be my last taste of the stuff for a while.

One bite erased all memory of the desperate dirty-water hot dog I ingested the night before, walking home from the bar. With complete confidence, I recommended Drusinsky for the next round. So, it was great validation to watch chef Ludo and chef Malarkey tussle over my prized pick on national television like two crushing schoolgirls while Bourdain agonized over not snagging the guy himself. I reclined on my couch, picked at a bag of stale pork rinds, and recalled that summer of 2012 when I had a first taste of The Taste. Tune in tomorrow night to see if my top taste sticks around.