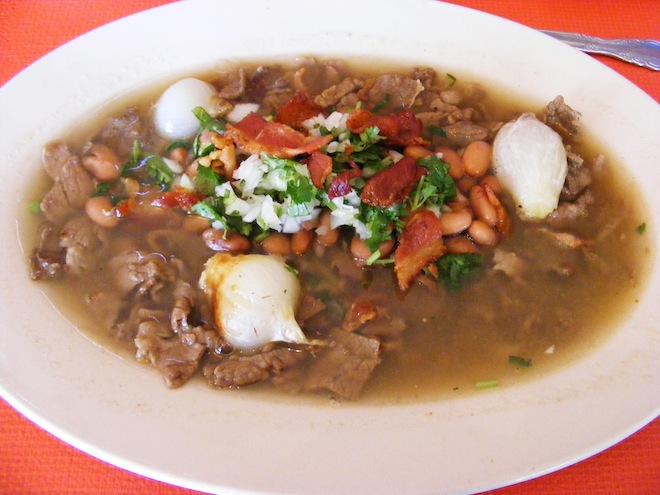 Tapatios, or people from Guadalajara, the capital of the Mexican state of Jalisco, have long constituted the largest group of Mexicans living in the greater Los Angeles area. As is common when cultures merge, their cuisine has fused into various Mexican-American joints, and now most commonly exists as part of combo dishes. In place of traditional cuisine, comida economica (plates of a main dish with rice and beans) took on adulterations such as sour cream, yellow cheese, corporate tortillas, and short cuts—they also succumbed to a homogenous plating style of slop and glop.

Lately, I’ve noticed a few new restaurants that are serving dishes that are more true to the original flavors and menus from the Mexican state with the most well known Mexican cuisine, the most popular style of mariachi music (Son Jalisciense), and America’s most popular agave spirit: tequila (Americans drink 2 of every 3 bottles of tequila produced in Mexico).

In addition to a gaggle of excellent tortas ahogadas restaurants, dishes like the famous carne en su jugo (beef in its own juices), have been popping up in places like Pico Rivera’s La Minerva Restaurante.

Carne en su jugo is a guisado of beef, bacon, and onions in a savory, beef broth garnished with cilantro and chopped raw onions made famous by Guadalajara’s six branches of Karne Garibaldi—they hold the world record for the fastest service.
You won’t break any land speed records at La Minerva, but you’ll appreciate the tasty items, including the aforementioned carne en su jugo, tostadas of pork skin and feet, flautas, and, naturally, the tortas ahogadas.

La Minerva is one of the only places in town that serves a popular street food item that’s targeted towards children, called salchipulpos (literally, hot dogs and octopus). Hot dogs are split to look like baby octopi, deep fried, and then covered in ketchup. Sometimes it comes with fries.

Pull up a seat surrounded by colorful, classic Mexican kitsch, grab an ice cold Carta Blanca, sit back and taste the Tapatio revival.