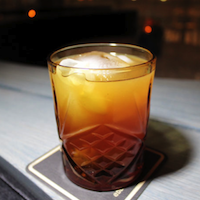 While sitting alone with my many cocktails at Roy Choi’s new stylish POT Bar in Line Hotel Koreatown, set to open this Wednesday, a little girl in a karate uniform walked up to me with a slice of chocolate cake on a plate and asked politely, “Would you like some cake?” On instinct, I declined because I never take cake from strangers. But, dammit, I should have known better because this is Roy’s place.

(I soon found out that the 8-year-old girl with the cake was neither a generous stranger nor a hostess but was in fact Roy’s daughter.)

After all, here “bottle service” will be a bucket filled with cocktail squirt guns and Long Island Iced Teas will be on tap. “Pot Bar” is spelled out in Mylar letter balloons on the ceiling over the bar and the cocktail menu is a resurrection of those ‘80s cocktails we love to hate. Basically, leave your ideas of craft cocktails and bars at the door. They ain’t fancy here, they’re fun.

And if your mind isn’t already blown by Choi’s creativity, mixologist Matthew Biancaniello was tapped to do the cocktail program here. This is Biancaniello turned up to eleven, with the chef challenging him to take flavors further than he has in the past.

“The first time I did a tasting for Roy, he kept saying, ‘Bolder.’ No one has ever told me that,” said Matthew. “But the thing that’s great is I can take the mushrooms further, I could take the uni further. He didn’t mind that. Where most people would be, ‘Tone that shit down for everybody,’ he was the total opposite. He has a very strong feeling of how this audience is going to be. So I’ve loved working with him on that.”

During its opening weeks, Pot Bar will have a list of 16 cocktails. But Matthew says that may expand to six additional cocktails per category—Original Cocktails and Cocktails—once the restaurant opens four weeks from now.

The Original Cocktails are all Matthew’s while Roy was the man behind the concept of the “Cocktails” section. “Roy really wants the ‘80s cocktails to be popular again,” Matthew said. “He wants people to come in here and order White Russians like crazy.” Considering these sorts of cocktails are popular in Seoul, it’s a smart move.

But these will be Matthew’s versions of the “classics.” Instead of the Dude’s White Russian, it’s been Biancaniello’d with candy cap mushroom-infused vodka. The Long Island Iced Tea switches blood orange soda for Coca Cola and offers aloe chunks via a boba straw.

Soju with choice of Nattō, curry or kimchi: The curry cocktail is made with a “21-spice curry that is absolutely incredible, it’s not like anything I’ve had. I combine that with Cabernet wine pickling liquid and it’s super savory. It’s got the pickling, it’s got the onions on top. The kimchi is a stirred cocktail with kimchi-infused soju, Salers, and Charreau aloe liqueur. Might be putting a garlic tincture since garlic is a big thing in Korean food. I got durian bitters, too, so maybe that’s where it’s going to go.”

Mushroom: Elijah Craig 12 year, shiitake, Cynar, Carpano Antica. “It’s one of the first mushroom drinks that I made at the Roosevelt and it’s like a Little Italy with shiitake mushrooms.”

Hops: Anchor Distilling Hop Head Vodka, sweet potato or carrot juice. “Hops with the sweet potato juice and kaffir lime zest is really, really cool. So what that is basically is taking that Hop Head vodka, and we juice the Japanese sweet potato and it gets really creamy. Then I zest kaffir lime on top. So it’s creamy, it’s hoppy and then it’s aromatic.”

Mezcal & Tonic: Pierde Almas Espadin. “Mezcal & Tonic is just gin & tonic with mezcal, and I do a chiffonade of pearl onions, kumquats, olives, dill, lime juice and tonic. What’s great about that is once that sits and soaks, this great mezcal and tonic is fragrant and savory with food notes.”

Uni: 123 Reposado tequila, roasted nori, cumin simple syrup, smoked salt. Top Chef Brian Huskey of Paiche had given Matthew the specs for the sous vide uni used in this cocktail. And not to worry. You’re not going to be drinking sea urchin, Matthew swears. “It’s super savory, it’s got a little bit of the ocean. When Roy tasted it he was like, ‘This is what it’s all about.’ He loved it. It’s very balanced and ocean-like but also smooth and creamy.”

Singapore Sling: “Very straightforward. The only thing I change about that is that I make a clove-infused grenadine to drizzle on top, which is nice.”

Midori Sour: This dive bar staple arrives in huge beer mugs and Matthew hopes to one day garnish it with a flaming melon ball. Instead of the sickly sweet cocktail of yore, it’s now refreshing and balanced thanks to its sour mix of agave, lemon, lime, and yuzu. “I’m taking Midori Sour and adding yuzu and Green Chartreuse to that and some nice grapefruit, too. So I’m making it a little bit more sour as opposed to sweet.”

Fuzzy Navel: One of the most easygoing drinks on the menu with nary a taste of booze. “I love it because it’s an apricot liqueur and a peach liqueur, so I split ‘em. I use passion fruit, fresh kumquats and some lime juice. It’s taking something super sweet and balancing it out but still having those other flavors, so it’s super tropical.”

Stinger: Matthew brought in this classic, inspired by an interaction he had when he still worked at Library Bar: a married couple requested the cocktail to celebrate meeting fifty years prior in the hotel. “That’s one of the few classic cocktails that doesn’t have citrus that you shake. We pour it over crushed ice. I torch some sage instead of mint and it’s an aromatic.”

Tom Collins: “It’s a basic Tom Collins in terms of gin, lime, agave and soda, except my gin is infused with stinging nettle. It’s just a nice aromatic that goes through it.”

White Russian: “Roy really wanted to keep much of that flavor, so what I did was candy cap mushroom infused vodka, Kahlua cream and then a Kahlua foam with shaved coffee beans on top.”

Long Island Iced Tea: Mezcal, aquavit, Smith & Cross rum, Batavia Arrack, Cap Rock gin, lemon juice, agave, fresh blood orange juice, blood orange soda, aloe vera chunks. For an extra bit of fun, Matthew added aloe vera chunks which can be sucked up courtesy of the accompanying boba straw. “The flavor profile is smoky, notes of anise and then that strong rum flavor. And it’s not sweet.” This upscale version of the frat classic will be made fancier with a price increase once it’s put on tap in the near future.

For those worried about the fact that Matthew isn’t behind the bar here, don’t fret. There’s a team of bartenders hailing from the likes of Mo-Chica, Feed, Cole’s, and Mercer Kitchen (New York). And with plans to build another venue upstairs from Pot Bar, Matthew hints that he may just pop up there. “They’re building another thing upstairs. I don’t know what’s going to happen with that, but that might be more the style of what I’m wanting to do. It’s going to be more intimate.”