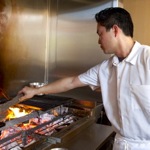 The cries of street vendors all over the world have been heard, and they’re finally receiving the international recognition they deserve—a world street food congress. In recent years it has been hip to feature street food on food television and in food magazines—highlighting the unsung stands revealed by the likes of Bizarre Food’s Andrew Zimmern, and showcasing the gourmet food truck phenomenon ignited by Los Angeles’ own chef Roy Choi.

But here’s the truth: everyday across the globe, more people dine sitting on curbs, squatting, standing, leaning against shacks, and reclining on plastic furniture than in all fine dining, casual dining, fast food, and mom and pops combined. Most of the world is poor, but is rich in itinerant dining opportunities.

The World Street Food Congress 2013 will convene in Singapore to promote the lifestyle to street food lovers, entrepreneurs, chefs, and entrepreneurs in the restaurant business, in addition to travel and tourism sectors.

L.A.’s own chef Bryant Ng of the Spice Table—named Food and Wine’s best new chef and one of our chefs of the year in 2012—will serve on the board for the Congress’ debut, and has been busy making trips to Singapore and Vietnam to up his street food game with such menu items as Singaporean duck rice—made with ground duck, mushrooms, Asian basil, cracklings and steamed rice.

The convention’s website praises the “’jolly jeeps’ in the Philippines, the ‘kaki limas’ in Indonesia, falafel stands in the Middle East, food trucks and burger stalls in America, street stalls in Bangkok, taco stands in Mexico, street food inns in China, and hawker stalls and food courts in Singapore and Malaysia, [as well as] the cafes and fine restaurants that take comfort street food to an exquisite level.”

Attendees will participate in panel discussions, a jamboree featuring legendary vendors from all over the planet, as well as an awards ceremony. What better reason do you need to put down that Michelin guide? Give your juice cleanse a break, pull up a milk crate, and come learn how the majority of Earth’s inhabitants get their sustenance.

Margi Chimichangas Is Serving Deep-Fried Deliciousness from a Trailer