Home Uncategorized Spago’s Christopher Miller on Being a Master Sommelier 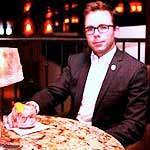 As a wine enthusiast, you probably love geeking out at boutique wine shops, can easily pick the perfect wine to go with dinner, and have even memorized a handful of Wine Spectator’s 100-point wines. But can you blind taste a wine and correctly pick out its grape varietal, identify where it was grown, and name which vintage it’s from in under four minutes?

Yeah, not many people can. But those select few that think they have what it takes undergo tough testing from the Court of Master Sommeliers, an examining body for wine service professionals that was established in 1977. How tough? Out of the thousands who’ve put their skills up to the challenge, only 129 oenophiles in North America, and fewer than 200 across the globe, can rightfully call themselves master sommeliers.

You have to forsake any life outside of wine for years and immerse yourself in intense studying and memorizing all things vino in order to pass through four levels of testing: introductory, certified, advanced, and the invite-only master. On average, it all takes about a decade to complete. And for those who do make it all the way to the master sommelier exam, which is comprised of three parts—wine service and salesmanship, theory (speaking and displaying wine knowledge), and practical tasting (correctly identifying six different wines in under 25 minutes)—they’re up against a pass rate of about 10 percent.

To learn more about this arduous undertaking, I went to Christopher Miller, beverage director at Spago Beverly Hillsand, as of this past July, L.A.’s newest master sommelier. Besides being one of just four masters in the area, he’s also noteworthy for being the only one who works in a restaurant.

What’s the point of being a master somm?
What’s the point of getting a Ph.D.? Let’s say you’re an engineer and you already have a job working at a rocket factory; do you need a Ph.D. to work in rocket science to keep working there? No, but you still go get it. Some of it is personal fulfillment.

In the restaurant world, do you have to be an MS to be considered a good somm?
Some of the best sommeliers I know are not master sommeliers. Raj Parr [sommelier of the Michael Mina Restaurant Group] is famous for that, for not being a master, but he’s one of the greatest somms on the planet. But he doesn’t want to memorize the appellations of South Africa and he doesn’t want to memorize the different regions for table wine in Hungary. You can argue their importance one way or the other, but they’re not among the highest quality wines, so a lot of people don’t want to study that kind of stuff and I don’t blame them.

How long does the MS certification process take?
You can [test on the three] parts in successive years, though, as soon as you pass your first part, your clock is ticking as they say. And you have two more tries to finish up before it all goes away. I passed my Theory and my Service the first year [in 2006], but failed Tasting by a point or so. The next year, I also closely failed. The year after that, it wasn’t super close, but I failed a third time so I had to retake everything. I came back this year and did them all at once, which is pretty rare. There’s probably been about, I’m guessing, less than 30 [master sommeliers] that have passed it all at one time.

What sort of questions are on the exam?
“Compare and contrast the climatic conditions of Region X versus Region Y.” You can answer it succinctly but you’ve gotta have enough training to do so. As part of your service examination, you’ll walk up to a table and they’ll say, “Off the top of your head, we’re going to throw a banquet for a hundred people in a month. It’s going to be a six-course tasting menu, and we’d like a wine [pairing] for each one, all from different countries. We want to do something fun, but not too expensive. Here’s the menu, and our total budget is $6,000. What would you recommend?”

And on the test it’s not just wine but spirits, too?
You have to memorize 200 classic cocktails and all the ingredients to them. We’re talking things like Widow’s Kiss, Last Word, and Bijou. All kinds of weird, wacky stuff. There are a lot of spirits [questions on the exam]; what it means to have a Master Sommelier pin is that you can go into any world-class beverage program and run it. I think I had a little bit of an upper hand in some things because I work as a sommelier and beverage director; not everybody else does. A lot of people that [take the exam] don’t necessarily work in that capacity, so it’s more difficult.

What does this MS title mean for you now?
It means I don’t have to study anything that I don’t want to anymore.

In addition to working at Spago, Miller will be teaching at the Court of Master Sommeliers and has his own wine company called Meliora Wines, producing Chardonnay and Pinot Noir from Santa Rita Hills in Santa Barbara.