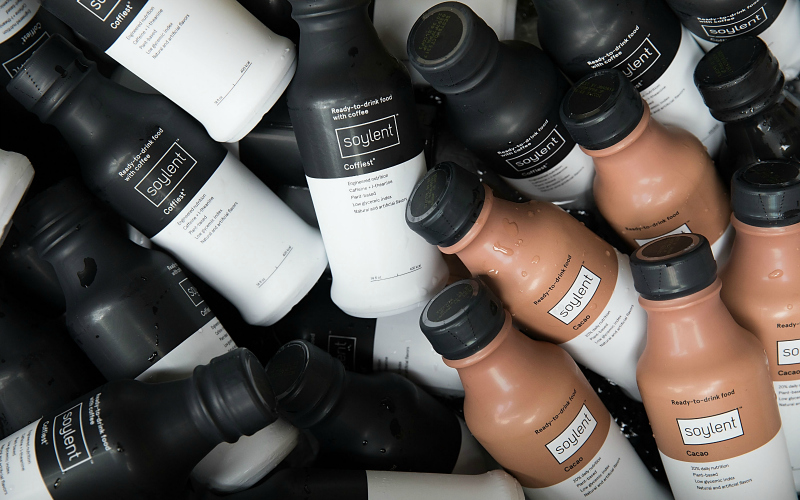 In a drab office building on Broadway near 2nd Street downtown, Rob Rhinehart is holding forth on how Soylent, his lab-made, pro-GMO protein drink, should be considered no less natural than bread, eggs, or milk. “People think there’s a sacred or natural way of doing things, but the reality is [the food system’s] always been evolving,” he says, sitting at a coffee table while flanked by PR reps. It’s easy to imagine him making the same argument as part of the pitch that he reportedly gave tech billionaire (and Soylent user) Larry Page to land $50 million from Google Ventures in May.

The money will help Soylent and its parent company, Rosa Labs, move into their new headquarters in the rapidly transforming Arts District this month. “I like to be part of what’s next,” Rhinehart says. He and his 55-person team will be settling into At Mateo, an $80 million mixed-use project with vintage-industrial good looks and a possible helipad — something Rhinehart has insisted on.

An electrical engineer and programmer, he created Soylent in 2013 to save time and money while working on a low-cost wireless start-up and residing in San Francisco. “Live more simply so you don’t have to worry so much about expense,” he says. “That’s what we should be using technology on today — making the basics better.” In February Soylent hit No. 1 in Amazon’s grocery category, despite two product recalls since the fall of 2016, one of which followed customer reports of intense gastric distress. (After manufacturing tweaks were made, Rhinehart told TechCrunch, “[We’ve] gone a long way in improving our ingredient and supplier diligence.”)

Now he’s looking to take Soylent beyond its core demographic of techies and college students. The company has introduced flavors like cacao and café vanilla, and it’s working to get the product into brick-and-mortar stores. This summer 7-Eleven announced that various L.A.-area locations would carry the product. Rhinehart isn’t just positioning Soylent as a low-cost caloric solution for people too busy to eat solid food. He talks a good Malthusian game about how Soylent can feed a world population hurtling toward more than 9 billion by 2050. “Low-income people are paying $8 for a Big Mac meal,” he tells me. “I think they can absolutely pay $3 for a nutritious meal.”

Although some people seem to think that the product was named after Soylent Green, the 1973 dystopian movie in which an overcrowded planet sustains itself on crackers made from (spoiler alert) people, Rhinehart actually based the name on the 1966 sci-fi novel, wherein soy-and-lentil steaks are the meal of necessity. Squint and you can see how the simple notion of a drinkable meal dovetails with the less- is-more ethos of Henry David Thoreau, whose book Walden Rhinehart first read as a ten-year-old. He admits Thoreau would have been put off by the 650,000-square- foot Soylent plant in Missouri but says, “I think the output is something he would be interested in.”

Thoreau built his own house, Rhinehart notes as well, before offering to take me to Echo Park to see his “shipping container  home.” In truth the 40-foot red steel box sits empty beside the modest three-story apartment building he’ll soon be vacating for digs near At Mateo. Still showing traces of graffiti, the container is the same one Rhinehart installed on a lot in Montecito Heights in 2016, yielding vandals, irate neighbors, and a criminal zoning complaint. (He pleaded no contest in April.)

“Someone stole the solar panels,” he says as we walk into the container, where he wants to install windows and a Swedish shower that would use gray water from his washing machine. It seems there’s no shortage of things that can be done with the steel box, including hauling it around for camping in Ojai or Death Valley or making the container into a bus that could be hailed by smartphone. For the time being, though, its next destination is a workshop near Soylent’s new headquarters.

RELATED: Here’s What’s Up with the $80 Million At Mateo Building in DTLA