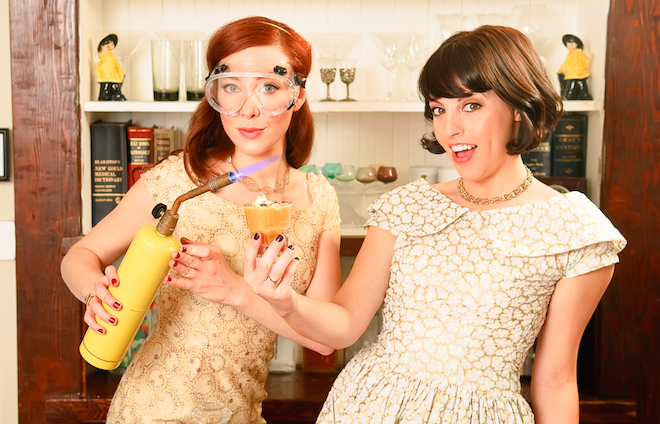 “There’s nothing I enjoy less than walking into a bar and being sneered at by a guy in a bow tie with a vest that’s cutting off his circulation,” says Georgia Hardstark. “I want a drink that helps me unwind and tastes good.” For Hardstark and her cohort, Alie Ward,  that means a peanut butter-and-jelly martini.

The snarky, amateur cocktail-shaking duo behind Cooking Channel’s Tripping Out with Alie & Georgia, premiering June 21, has fashioned a career out of deflating the stuffy mixology industry. “We make drinks you’d want at a dinner party,” says Ward.

Equal parts travel adventure, cocktail how-to, and comedy routine, the series marks a big step forward for the homegrown Web sensations. In 2009, Ward was working as an L.A. Times Calendar editor and Hardstark, her best friend, was slaving away at a “horrible desk job” when they made a satirical Web short showcasing a fictitious drink called the McNuggetini. It went viral, catching the attention of the fledgling Cooking Channel, which offered to produce 12 Webisodes that were shot in Ward’s Angelino Heights apartment. After two seasons, they quit their day jobs.

The pair’s success is only partly due to their Willy Wonka concoctions. The chemistry between Ward and Hardstark is infectious, and their wit is as biting as the booze. They’re also adorable in a rocker-Betty Draper sort of way that dudes enjoy and females aren’t threatened by. “The bar scene is still very much a guy’s world,” says Hardstark. And that’s the key to their appeal: Not only do they dream up libations geared to the average American woman, but—as with Tina Fey and Amy Poehler—women want to be their friends.

Ward sums up the show’s story line as “Laverne and Shirley meet Thelma and Louise meet Daria and Jane—and they pick up Anthony Bourdain along the way.” In each episode the two visit a new city, then throw a party featuring goodies inspired by their trip. “And we’re always ever-so-slightly overdressed,” says Hardstark, who owns more than 60 vintage frocks. “You’d be surprised how friendly strangers are when you’re dressed like you’re on Toddlers & Tiaras.”

Open Wide: Where To See It
Tripping out with Alie & Georgia debuts June 21 on Cooking Channel.