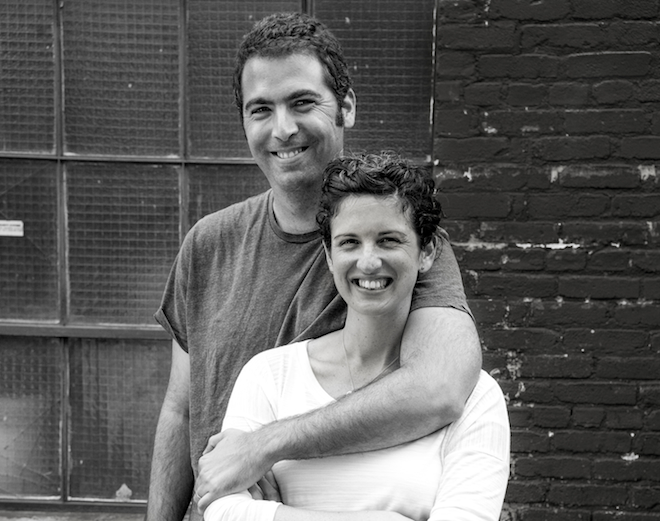 Share
Email
Facebook
Twitter
Pinterest
ReddIt
Josh Loeb was hosting dinner parties in a small neighborhood within Santa Monica when he realized that food—not publishing, which is what he had been doing previously—was his calling. A brief stint in management with Bruce Marder (Capo, Cora’s) and some cajoling of friends with money and Rustic Canyon the restaurant was born. Samir Mohajer was the place’s first chef, and, six months in, when Loeb decided to hire a pastry chef, fate brought Zoe Nathan into the picture.
Loeb and Nathan fell in love over tango lessons and restaurant concept daydreams and now have a three-year-old and another baby on the way. Much like their physical family, the Rustic Canyon clan continues to grow: Huckleberry, Milo & Olive, and (multiple locations of) Sweet Rose Creamery are getting two new siblings early next year. A partnership with chef Bryant Ng and his wife Kim Ng (The Spice Table) has solidified their plans to take over a large space on 7th Street in downtown Santa Monica; it will be split into two separate dining establishments. Recently, we chatted with Loeb to find out how one restaurant gave birth to so many delicious new ideas.
It doesn’t seem that you or Zoe are interested in creating a chain of restaurants, so what’s your general approach when it comes to development? Rustic Canyon is at the center of it, it’s our ethos, translated. Zoe and I always wanted to have a restaurant that was just about good local ingredients and making things by hand and doing it in a great, unpretentious style.
Why did you pick the Westside for so many of your restaurants and cafes? Naturally being from Santa Monica originally, and having lived in different neighborhoods in New York, I felt like there was a lack of great food options [in Santa Monica]. And Zoe coming from her time in San Francisco too, felt the same way.

How did Rustic Canyon spring forth so many concepts? It’s really been organic. As long as I have the capacity to do great stuff, I’m going to keep finding the right people to work with… it’s always been a learning process for us. We learned on the job, through trial and error, going to other restaurants, seeing what worked and what didn’t work. We’ve always hired great people who brought great levels of experience with them. When Zoe started, she brought in a whole new perspective on restaurants that was really important for me. Overall, we’ve grown as a group because we share the same ideals.

How does it feel to be labeled a restaurateur? I don’t think of myself as a restaurateur at all actually. I have a partner, Colby Goff, who does all of our financial modeling. He’s the CFO for all of our restaurants. My role more than anything is coming up with an idea and bringing it to fruition and making sure it is what is should be, making sure it reaches its potential. I seek out the right people for each concept, or see what our own people love and are doing already. I work with the graphic designers and architects, I coordinate with the chefs as we build a menu, I help structure the style of service. But I know intuitively how we treat our staff, the way we encourage our staff to grow with us. Especially now that we have multiple places. I’m in charge of making sure the group is consistent and making sure it’s complementary.

How many locations of Sweet Rose Creamery are you planning on opening? We don’t really have a plan. We want to keep the quality good, that’s why we don’t wholesale. We don’t want the ice cream to get icy in someone’s freezer, and for them to then think it’s a bad product or to serve it when it’s not the right texture. It’s important that anytime anyone has Sweet Rose it tastes as good as it should taste. The Pico location is bigger because it will be our commissary. We can sell out of the front and then make everything for each location in back. That commissary has the capacity to service five to 10 stores. And while we want to be in neighborhoods and be the neighborhood ice cream shop, we’re planning on opening on Beverly and then taking a step back and assessing our long term goals.

Will the location on Beverly have food component? Yes, we’re going to have Milo & Olive breads and pastries and Caffe Luxxe coffee and espresso. I love Caffe Luxxe, that they’re local, that they opened their first shop when we opened, that they roast their own beans. There’s an integrity to their espresso and the way they do business that makes them a fit for us.
Do you see yourself ever opening another location of Milo & Olive or Huckleberry? No. The only reason we’re expanding Sweet Rose is that it’s a finished product—we can make it in one location and it’s stable and anywhere you have it, you can have the same product. When you have restaurants where there’s a live kitchen, everything changes, and we don’t want quality to suffer. We don’t want to have a commissary for savory food ever—things just don’t ever taste right when they come from one location and are shipped out. While we have recipes for costing purposes and consistency, we also train our cooks to cook intuitively. So doing that on a big scale would never work. We want to be able to control the quality of the product, and the way we do that is by creating new concepts each time. It’s a little bit like reinventing the wheel each time, but it’s also fun. Part of this for me is that it’s creatively satisfying, breathing life into a new place.
How did you meet Jeremy Fox (now chef at Rustic Canyon)? Rustic Canyon has always adapted to the person we hired to run the kitchen. With Samir, it had some Persian influences. When Evan (Funke) came on board, it turned Italian because Evan loves and breathes Italian food. So when we met Jeremy, we were impressed with what he’s done and how he is as a chef, but we also knew that his style and pedigree was different from the casualness of Rustic [Canyon]. But he ended up wanting to cook simpler food and what brought us together was that ultimately we shared the same goals. The skill level and thought he puts into each dish is really amazing.
Did you partner with Bryant Ng for your new project before you found the space or how did that partnership come about? We found this space that we loved. It’s big though, and we know our family is about to grow (we have another baby on the way), so we can’t take all of this on ourselves. We need partners, and at the same time, it allows us to work with people who share our vision. Bryant Ng we’ve admired for a long time. We love his food and his style. And it just so happened that the day we saw the space, that night Bryant and his wife, Kim, came in to Rustic [Canyon] for dinner. I wasn’t there, but I saw that they had been in the next day on the manager’s notes. Zoe and I saw his name and both thought the same thing at the same time. So we called him and we talked and… partnering with someone in this business is a lot like a marriage. Of course you have to like each other, but you also have to want the same things and have to be willing to give and take. We got that feeling from Bryant right away.
Is the new restaurant going to be another Spice Table? No, it’s not going to be like Spice Table at all, but it is going to be Bryant’s style of cooking. Next door, we’re opening a wine shop and tasting room with Katherine Weil, who’s been our sommelier for seven years at Rustic [Canyon]. There will be a paired down food component there as well, mainly cheese and charcuterie. We should be open by next year, though there’s a lot of construction to be done. We can’t wait.

You inspire people in this business because you dream big. What else is on your wish list? It’s different every time. Zoe really just wanted to have one place. She’s a lot more detail oriented when it comes to that. If it was up to her, we’d just have one really great place. Huckleberry opened because Zoe was a baker at heart and we were doing Saturday morning breakfast at Rustic and it was always busy in the kitchen and she needed a place to do her pastries and just serve her comforting hash and eggs and sandwiches. But I really enjoy it, I enjoy expanding our family of people in our restaurants. I have a few ideas in mind, big ideas, but they will only happen if the time is right, if we find the space and the people. Sometimes we’re inspired by the people, and by the space and sometimes we’re inspired by a natural desire to try something new. Something that will benefit the people and the place.