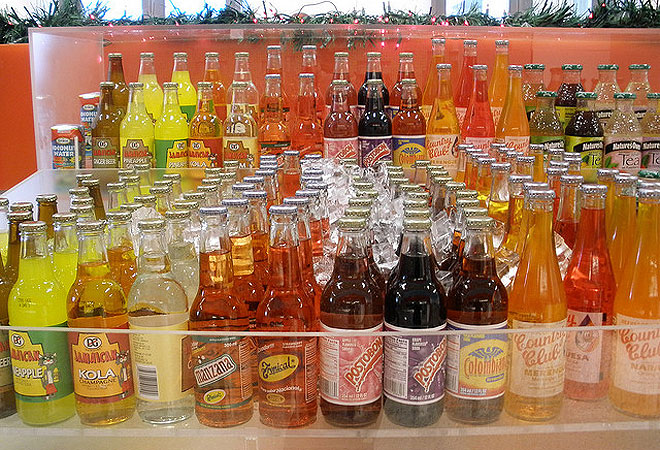 Too many of L.A.’s Latin American restaurants either don’t have a liquor license or are waiting for one—sometimes for years. But never fear! Sweet soft drinks in wacky flavors from everywhere from Mexico to Central America to the Caribbean are here to help round out your international dining experience. Though nothing shall ever usurp the position held by Mexican Coke (mmmm, cane sugar), here are ten Latin American sodas to rev up your glucose levels.

OK, so Irish Moss vanilla drink is actually from Jamaica, but the flavor is similar to the Belizean seaweed shake and therefore prevalent at Belizean restaurants. This soda is the most palate challenging on this list—a wild combination of vanilla, seaweed, and condensed milk that’s a bit like a giant bong hit with a vanilla shake chaser.

Guaraná gets its bold candied flavor from amazonian guaraná. The result is almost like a sweeter Mountain Dew, and it’s currently one of the top 15 soft drinks in the world.

TuCola is the most typical soda you’ll encounter in Cuba, but a couple of the beverages that left the island in the ’50s and ’60s and have found a home Stateside. Example: Ironbeer, which resonates with a fruity, tropical Dr. Pepper bite.

Materva’s Yerba Mate originated in Cuba but is now produced in Miami. The base of this soft drink is the super-caffeinated yerba mate tea, which make this herbaceous pop a bit hit with South Americans. El Criollo’s founder William Sera swore that it was good for your digestive system last time I was at the Van NUys restaurant. He’s in his 80s and still waiting tables, so I’m inclined to believe him.

I first had Kolashampan in San Salvador and was caught off guard by its strong bubble gum nose and sour aftertaste, but after adjusting to the strangeness I embraced the dulcet potion, which is beloved throughout Central America. Don’t let the name fool you—this is pure Bubblicious

Tropical might be the sip that inspired Gwen Stefani to sing “It’s bananas, b-a-n-a-n-a-s”—OK, probably not—but this unusual cooler truly is bananas. After a baleada or two, the artificial candied banana splash will have you swinging from the ceiling.

This regional Pueblan tonic rarely made it out of Puebla until recent years, when homesick poblanos willed it Stateisde. Okey soda comes in various fruit flavors, but the pineapple variety is the perfect companion for the famous Pueblan sandwich: cemita poblana.

Sidral Mundet is the most Mexican of all soft drinks (after all, Coca Cola is American). You’ll find this fizzy, syrupy apple drink at just about every Mexican restaurant and market. Order this and you’ll receive an honorary Mexican badge. (Unless you don’t need no stinkin’ badges!)

Cream soda isn’t a popular Mexican flavor, but that didn’t stop Tonicol, the creamy, vanilla drink from the state of Sinaloa, from achieving regional success. The desserty refreshment is also available in Tijuana and right here in L.A.

Why hasn’t Glassell Park’s Old San Juan Restaurant picked up Coco Rico yet? It’s Puerto Rico’s top refreshment! (Maybe it’s because they actually HAVE a liqour license.) Thankfully, the coconut-flavored pop can be found in various local markets, for all those times you feel like a nut.

Where to get them? El Camaguey Market (Palms), Galco’s (Highland Park), Carniceria Argentina (North Hollywood), and at Latin-American restaurants throughout Los Angeles.

*Note: Many of the sodas on this list have been purchased by transnational companies.