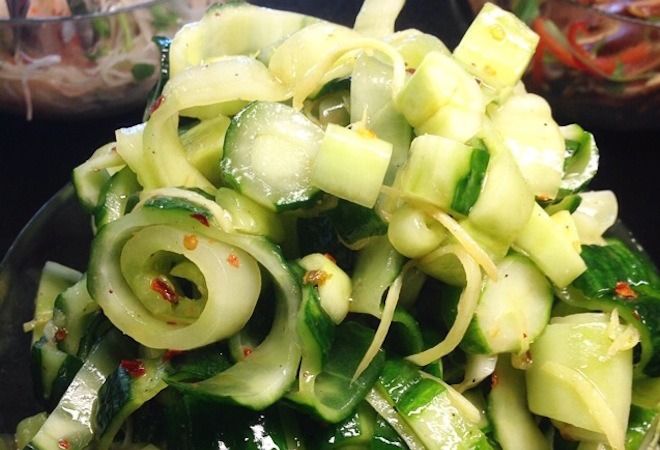 Back in March, people rejoiced when they first began hearing about Vivian Ku’s plans to open a Taiwanese-Chinese noodle house called Pine & Crane in Silverlake. It was an opportunity to dine on dan dan noodles, beef noodle soup and other mainstays of the San Gabriel Valley without having to hop on the freeway. The beef noodle soup at Pine & Crane may not have included a thick layer of oil on top like some versions, but it was still an honest testament to the homestyle cooking.

One of the most interesting aspects of this restaurant was Ku’s resolve to have a seasonal menu featuring varieties of Asian produce from her family-run farm in Bakersfield. This meant an introduction for the Silverlake community to things like Chinese garlic chives and scapes, sauteed chrysanthemum, floral amaranth greens, pea shoots, “A” choy and cabbage sprouts (similar to brussel sprouts and harvested in their infancy). Pine & Crane sells select produce by the pound, and it’s not unreasonable to think that a handful of Silverlake moms are already sautéing pea shoots in their kitchens.

With the arrival of summer, Ku is shifting gears and expanding her farm-to-table concept. You’ll now see water spinach and sweet potato leaves on the menu, as well as a standout cucumber salad dish featuring Japanese cucumbers. Ku salts the cucumbers until they’re tender and pliable, cuts them into straight sections (the Japanese versions are shaped likes s’s or j’s) and rolls her knife through them to get a spiraled effect. Ginger, sugar, and vinegar are added, as well as a sesame oil flavored with numbing Sichuan peppercorns. Because this variety has less water content, you get a more prominent crunch and flavor profile.

Fibrous chayote leaves and eggplant are on their way, as well as the highly-prized Taiwanese yellow watermelons, which already have the owners at nearby Cliff’s Edge excited. Whereas red American ones can be spongy, these yellow kind have a soft honey note and a crisper bite. For now, Ku plans to serve it sliced.

“It’s been a relatively easy process to add things to our menu. We’re thinking of featuring twice cooked pork and maybe a fried catfish dish in the future. At the same time, it’s also been hard to take things off the menu because of seasonal restraints, which is something we’re still learning to deal with. When we tried removing the trumpet mushrooms, people weren’t too happy.”

Ku, however, is used to juggling various expectations. Sometimes they come from customers who grew up in the SGV eating a specific style of Taiwanese cuisine. Other times, they arise from the kitchen staff. “For a while we considered making a Taiwanese oyster vermicelli. Our manager Moonlynn and I were super excited and slurped our bowls down, but the Chinese cooks were not necessarily into it,” Ku laughs.