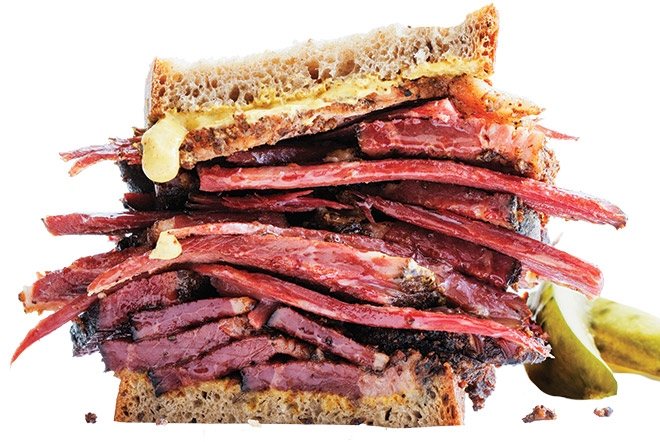 At the now-shuttered Mezze on La Cienega Boulevard, chef Micah Wexler served Middle Eastern entrées with a personal spin. At Wexler’s Deli, his ten-seat counter stall opening this March at downtown’s Grand Central Market, he’ll go to his traditional Jewish roots. “For my own taste, I don’t want to have a duck pastrami sandwich,” Wexler says. “I want to have the classic stuff. So at the end of the day, the response I want when you eat the pastrami is, ‘Wow, this is the best pastrami sandwich I ever had!’ Not, ‘This is the most interesting pastrami sandwich I ever had.’  ”

While the historic market has been undergoing a culinary revival, welcoming purveyors of salted caramel croissants and avocado burgers on brioche buns, Wexler’s operation harks to Grand Central’s beginnings 97 years ago. Deli owners were craftsmen; there weren’t the electric slicing machines that turned cold cut production into an industrial assembly line. For Wexler, who’s 31, “classic deli fare” is not just mass-processed protein stacked sky-high. He will cure his pastrami and boil his corned beef on the premises and hand-slice them thickly. He plans to grind the coarse brown mustard himself and brine the house-made pickles. He also spent months developing a rye bread with Etxea Basque Bakery that he says is “really pretty killer.”

Wexler’s egg creams and chocolate phosphates owe a debt to his paternal grandparents. When he was growing up in North Hollywood, they took him to Langer’s in MacArthur Park—the one local deli he reveres. “My grandmother would always order a chocolate phosphate,” Wexler remembers. “She’d point her finger at the waitress and say, ‘Now you make sure there’s plenty of chocolate there.’ It didn’t matter if the whole thing was full of chocolate. She’d say, ‘Uh-uh. This isn’t right. Go put some more chocolate in here.’  ” Although she’s passed, his grandfather is still around at 96, so Wexler had better get the recipe right.

The Best Pastrami Is Made Here in Los Angeles