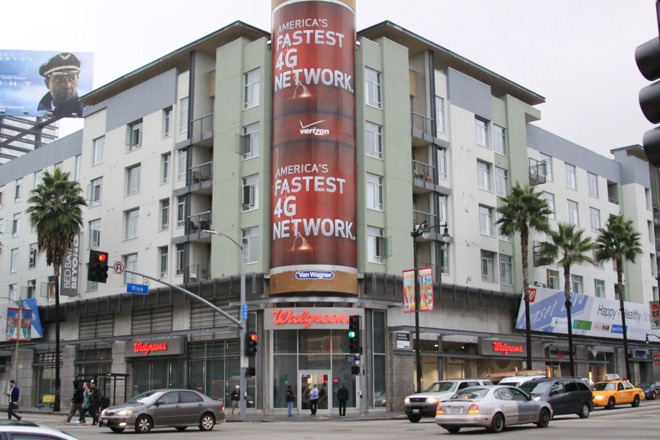 Have you been to that new Hollywood Walgreens yet? It took over the old 23,500 sq. ft. Borders space on the corner of Sunset and Vine and is—deep breath—crazy awesome. As the first flagship Walgreens on the West Coast and the 8,000th store of the company, this newest offering, which opened last month, goes above and beyond your typical drugstore. This, the most beautiful Walgreens I’ve ever seen, has daily hand-rolled sushi, a fro-yo bar and a soda fountain with 130 different Coca-Cola drinks. But the feature that got me oohing and ahhing nonstop was (surprise, surprise) its liquor section.

It’s deluxe, son. Now, mind you, K&L Wine Merchants, which is just down the street on Vine, has nothing to worry about from this fancy pants drugstore. Walgreens’ liquor section doesn’t boast “the most extensive” anything, rather, just whatever you need for a quick fix. And, believe me, you pay for that convenience. A bottle of Basil Hayden’s Bourbon goes for $36.99 at K&L. Here, it’s $52.99. Other prices, however, aren’t as exorbitant, like the Beefeater Gin for $16 here as opposed to $14 at Beverages and More. And the Maker’s Mark is cheaper here at $24.99 versus nearby Spirit Shoppe & Deli’s $29.99.

But the drugstore is open 24/7 and its liquor section—which has its own entrance across from Hungry Cat—is open til 2 a.m. (reopening at 6 a.m.), so it’s perfect for nightlifers who want to roll up in their limo on the way to the club to grab a bottle of Cristal and some cigars, or neighborhoodies who want to bring the party back to their place.

The refrigerated case in the wine section displays a few bottles of high-end tequila, cognac, and whiskey as well as a variety of cigars, from the $4.99 Punch London cigar to the $21.89 Montecristo. The refrigerated beer case is largely taken up by macro beer with a few popular craft offerings from California breweries Stone Brewing Co., Firestone Walker Brewing Company, and Coronado Brewing. Sure, you’ll find Arrogant Bastard Ale here, but you won’t find smaller-run limited releases like the Stone 12.12.12 Vertical Epic Ale.

If you have time to kill, play around with the “Virtual Bartender” kiosk; it’ll help you figure out how much booze to buy for your party or even what ingredients to get for that new favorite cocktail you wanted to try at home.

I tested out the Manhattan recipe on the machine and had to suppress a “Squee!” when I saw it was King Cocktail Dale Degroff himself on the video demonstrating the recipe. If you couldn’t follow the video, the kiosk lets you print out the recipe.

So, no, the Hollywood Walgreens has nothing on dedicated liquor stores like K&L or Sunset Beer Company, but it is pretty kickass for a drugstore.