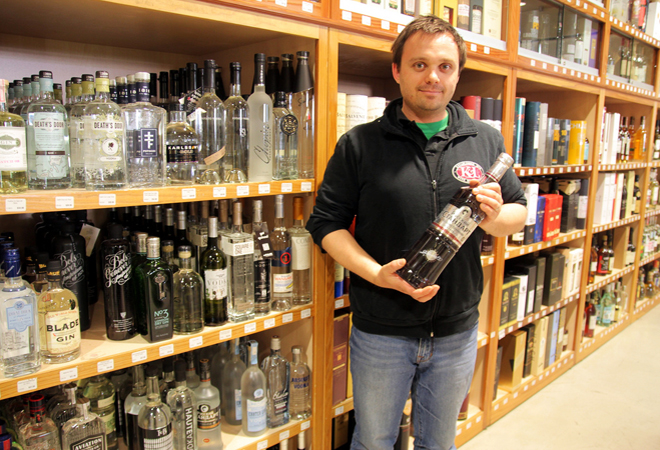 Most of you out there probably only use liquor stores for stocking up your house parties or finding the perfect host gift. You have your go-tos that you simply grab off the shelf without nary a thought before you dash back out the store. Because, if you just allowed yourself to linger and peruse the shelves, it could be a bit overwhelming. Who knew there were THAT many different whiskies? So in this recurring series, I go straight to the source—the spirits buyers from your favorite L.A. liquor stores—for the best deals, hidden gems and what bottle is THE one to have.

This week David Othenin-Girard, spirits buyer at K&L Wines in Hollywood, shares his liquor aisle insights. He spent three years building up that beautiful selection of quality booze you see spanning the back of the store. And you really can’t go wrong with anything you choose. “Because we’re a smaller retailer we don’t have to spend a lot of time working on the big brands, wasting space with Cuervo, Captain Morgan, or these huge brands. A lot of stores rely on those brands for margin. Fighting the big companies to keep the prices low is part of what we’re doing here.” However, David was still able to hone in on the standouts in his inventory.

Hidden Gem: Four Roses Single Barrel
“My go-to right now, which I think is undervalued and underrated, is the Four Roses Single Barrel. I think Four Roses is the last undermarketed company right now. They make excellent whiskey and they don’t charge a lot. They’re also the only ones that sell us cask-strength whiskey in single barrels besides Willett Family. It’s about $40, it’s a single barrel, it’s usually about 10 years old … given your Eagle Rare is maybe a better value, but I think there’s more complexity in the Four Roses.”

More Bang for Your Buck: Buffalo Trace, $19.99
“It’s their flagship brand so they intentionally keep the price really, really low. They’re basically competing, supposedly, with White Label Jim Beam on that product. It’s more expensive than that and significantly better than that. It’s about six years old, they don’t have a six to eight year old but in terms of bang for your buck it’s probably the most consistent in that rye-style bourbon.”

Perfect Pappy Stand-in: Weller 12 Year Old, $25.99
“The obvious choice for the Pappy people is the Weller 12 Year Old. It’s basically the same exact whiskey as Van Winkle 12 Year Old. It’s almost always available, $25 a bottle. The only material difference is that it’s bottled at 90 proof rather than 57 1/4 for the Van Winkle so you are trading off some power and alcohol. But in terms of the recipe, it’s that classic wheated bourbon blend. They’ve removed the rye grain, which is usually the small grain, and replaced it with wheat. It’s the Old Fitzgerald recipe which also happens to be the same as Maker’s Mark.”

Liquor Lust: GlenFarclas 1970 Single Cask, $580
“It comes from a very unique barrel that was set aside for a Japanese customer in the Glenfarclas warehouse many years ago. The guy never turned up to claim it, so we got a crack at it. They had moved it to the hottest part of the largest warehouse, and over the last several years it had concentrated to an incredible level. In a cask type that normally turn out 400-500 bottles, this cask yielded only 134 bottles. It’s a super sherry, but super dry style, which is also very unusual, with tons of exotic wood built especially for people who like dark bitter stuff (cocoa, digestifs, etc). It’s so concentrated that it glazes your glass with a layer of residue, which I’ve never seen before. Really gnarly.”

Next Big Thing: Rum
“The most room for a brand to grow, especially in this market, is the rum. Rum is the most misunderstood category, it’s the most inconsistent. The problem with rum that’s prevented it from being more accepted is there’s no regulation in rum whatsoever. Each country makes its own rules if they have rules at all. No stylistic consistency between the different regions. But it’s something the general population doesn’t really understand. There’s no one out there to explain it to them because the companies who sell it don’t want people to know. Bacardi doesn’t want people to know that they haven’t aged their white rum at all. The original Bacardi, the Carta Blanca, is an aged product that is then filtered for color. It’s a light, white rum, but it’s also an aged rum and they’ve moved completely away from that because to do that on an industrial scale is not feasible. [But rum is] coming back, especially with the cocktail thing and punches are hot. Rum’s definitely coming up that way. And we’ve got some great rum bars in town, too, La Descarga, Caña.”

Speaking of Which, Best Rums
“Banks is a great rum, it’s a white blended rum, light and heavy rums blended together. I also think Simon Ford’s new rum is excellent, Cana Brava, it’s out of Panama. That is a really fun mixing rum. The El Dorado Rums are extremely good values.”