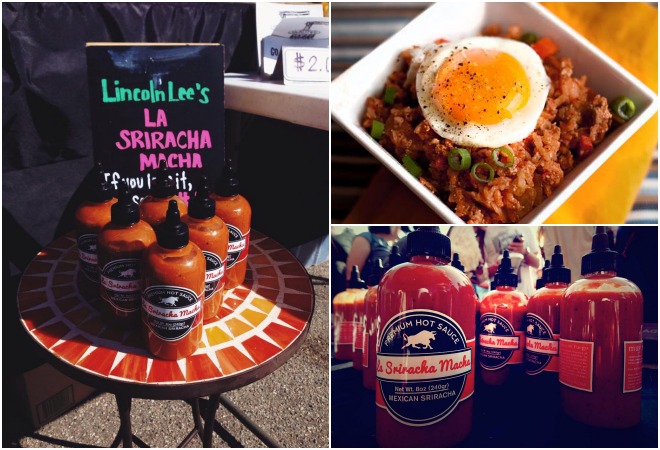 Sriracha and Tapatío: two beloved hot sauces you would probably expect find in just about every cupboard in SoCal. But what would they taste like if you put them together?

Enter La Sriracha Macha, a brand new homegrown hot sauce that markets itself as the “Mexican Sriracha.” It’s made by fermenting a blend of jalapeño, serrano, and chipotle peppers (just like how Huy Fong Sriracha is fermented) and blending them with both roasted and fresh onions, cilantro, “asian seasonings,” and a few other secret ingredients. The taste, according to the sauce’s creator Lincoln Lee, “is everything L.A.”

Lee, an Orange County native who works as a finance accountant, first got into cooking while attending law school, finding that hours spent in the kitchen helped relieve the stress of studying. He cooked a great deal of Korean food, which he grew up eating, but also became enamored with Mexican recipes. “Both are cuisines are simple but have great depth of flavor,” he says. One of his creations, a spicy homemade pepper sauce, was so popular amongst friends that he eventually decided to bottle and sell it. “One of the biggest reaction I got was ‘this tastes so familiar,’” says Lee, who admits that when he starting getting positive feedback from both Latino friends and Asian friends, he knew he was onto something.

As you’d expect, La Sriracha Macha is quite spicy—Lee compares it King Taco’s famous salsa roja, which opens with a sting of heat but quickly mellows and deepens. “I love Sriracha but it has a good amount of salt and MSG, which is part of why it tastes so good,” says Lee. “I tried to use other spices that added that umami flavor in a different way.”

One of the first dishes Lee created using La Sriracha Macha was an al pastor kimchi fried rice, but he also loves it on tacos, pizza, noodles, and even fresh fruit. Just don’t call it fusion. “I don’t like the word ‘fusion’ because it makes it sound like a gimmick,” says Lee. “This is just a natural pairing of flavors that I thought went well together. I’m actually surprised no one has done something like this before.”

La Sriracha Macha made its inaugural debut at the K-Town Night Market in April, and later, during the DTLA Night Market, Lee teamed up with Keizo Shimamoto’s Ramen Burger to make a special burger sauced with La Sriracha Macha. “The two chefs from Ramen Burger tried it and loved it,” he says. You can expect to see the sauce at a restaurant near you: Seoul Sausage Company chef Chris Oh is a fan, KBBQ chain Moo Dae Po is using the sauce for a special chicken wing dish, and several local food trucks have already started stocking it. “People have told me that it goes really well with meat,” says Lee.

Right now, you can pre-order a bottle of La Sriracha Macha online ($7). Lee expects to begin shipping the bottles in early July, and hopes to have the sauce in stores later this year.

The Hot Sauce Expo Is This Weekend, and We Need All the Endorphins We Can Get Right Now