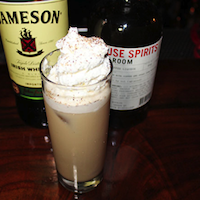 While the rest of the world will be grasping their hot mug o’ Irish coffee for warm comfort this St. Patrick’s Day, L.A. will be enjoying shamrock-wilting 80-degree weather. But don’t let that stop you from celebrating the alcoholiday. On Monday, downtown’s Seven Grand will debut its new cocktail slushie machine, kicking things off with a frozen Irish coffee. “It’s ready to rock with cream, sugar, whiskey, and coffee all in the mixture already,” said Seven Grand General Manager Andrew Abrahamson. It’ll be on special for $10. (They’ll also feature $10 boilermakers and $5 beers and shots. Bar Jackalope will have an Irish boilermaker bar and mobile Irish whiskey carts will roam the bar dispensing shots and cocktails.)

Since slushie machines have been infiltrating cocktail bars, it’s not surprising that the downtown whiskey bar finally decided to get one. “It makes sense in L.A., too, because all our summer menus should last eight months. There’s four months for the winter menu and even in the winter you can probably do slushie drinks,” said Andrew. 7G is also playing around with a “Whiskey Colada” for their new menu. “I think it works because the whiskey we’re using uses American White Oak, has a lot of coconut flavoring notes. And coconut pineapple together is great,” he said.

As for that Irish coffee, Seven Grand has long been known for making a near authentic one thanks to research conducted by former 7G bartender John Coltharp. “He went up to San Francisco and had Buena Vista’s and did his research on the Shannon Airport,” said Andrew. “[Coltharp] did a very true-to-form one and used Tullamore DEW which was what they were using in Buena Vista.”

But for Seven Grand’s Irish coffee, they use Jameson. “I like Jameson the most. There’s a softness to it. I like to use a bitter, oily coffee. Something that has texture to it. So using Jameson with that kind of coffee, there’s a sweetness to Jameson that the other whiskies don’t have. Tullamore is a little more rich, Bushmills is a little more malty, kinda fruity. Jameson has vanilla notes that play very nicely with a really oily coffee.”

Their recipe is basically: drop a heaping teaspoon of brown sugar in a glass mug, add piping hot French-pressed coffee, then the Jameson and top with an inch of hand-whipped cream, sprig of fresh mint for garnish. But if you want an iced version, you can either simply sub the hot coffee for cold brew coffee over ice or try 7G bartender Dustin Newsome’s recipe.

Add all ingredients to tin filled with a couple of ice cubes to help agitate while shaking. Strain into ice-filled Collins glass. Top with whipped cream. Garnish with fresh nutmeg shavings.

“My friends are the best friends

Now let’s get to drinking!

All glasses off the table!