Home Uncategorized Hot Knives: The Men, The Myths, The Legends 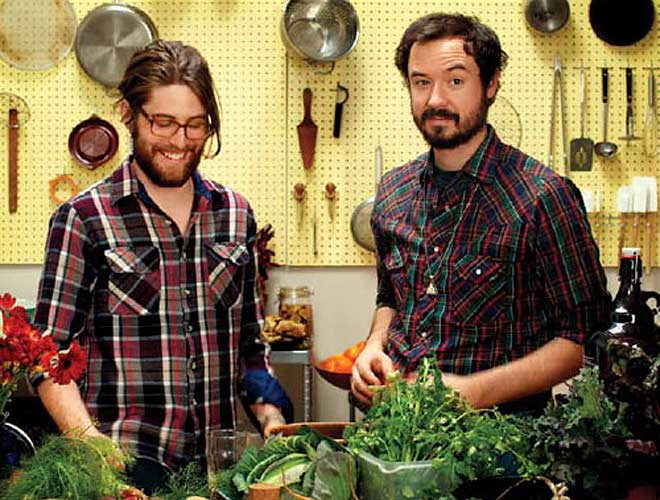 One of my favorite blogs on the planet is Hot Knives, the brainchild of Evan George and Alex Brown, a strange if not hilarious vegetarian duo that make me laugh almost as hard as they make me want to cook everything they post. And even though I plan on destroying them when I go up against them (and several others) at the Tony’s Darts Away Vegan Chili Cook-Off Face-Off this Sunday, I have to seriously admit how much I dig what they do. As we gear up for the competition, I caught up with them via email to learn more about these fine fellows, their blog, and what they dig most about L.A. Only part of what they say should be taken seriously.

Hidden talents or superpowers?
Evan’s really into geomancing (watch out) and Alex has a penchant for cryptozoology, but that’s not really a talent. Together we are the Nate Silver of produce: what’s gonna win out this season? We have our finger on the polls. Vegetables speak to us, or rather we hear them scream. This is why we’re good at cooking them; we know and appreciate their secret suffering.

What are your day jobs?
Evan deals news and facts as a radio producer for KCRW, and Alex peddles cheese and chocolate (i.e. the right kind of pusher) as the GM at Gourmet Imports [the wholesale/distribution leg of South Pasadena’s Nicole’s Gourmet Foods].

How did you two meet and how did the blog get its start?
We met at Occidental College as freshmen, over keg beer and complimentary T-Shirts (Evan: Skinny Puppy, Alex: My Life with the Thrill Kill Kult). Hijinks and impressive amounts of Jägermeister ensued. After school let out, Evan worked as a newspaper editor for a rag called L.A. Alternative and secured us a spot on their blog for recipes, providing us an outlet for years of drunken food experiments.

What’s your working dynamic like? How are recipes thought up, videos planned, posts written, etc.?
It’s a lot like jazz. We riff off of each other and what the vegetables tell us. Videos are usually derived from “Ah HA!” moments when we can’t stop laughing at the idea of creeping around a neighborhood stealing nasturtiums or making our own cough syrup.

When writing Salad Daze, and our soon-to-be-published second book out in March 2013 (newly titled Lust For Leaf), we basically set up a war-room with piles of vegetables, jars of spices and many, many bottles of whiskey. We indexed ingredients we HAD to work with, and studied them. We would throw food at each other and scream out free-associative cooking techniques, then catalogue what we created.

Any recipes of your own that you’re especially proud of, or find yourself making more often than others?
The aforementioned homemade NyQuil recipe was a triumph – and seasonally appropriate. Ideas we come back to over and over tend to either be condiments, like our version of Sriracha (we love fermenting things), or overt gut bombs like a grilled cheese sandwich made out of leftover Belgian Onions soup – where we use Chimay to create a non-beef based broth. All THREE of these beauties are in our first-born cookbook, Salad Daze. Buy our book.

Other blogs you enjoy reading?
We have several dozen blogger colleagues at [our blog’s web host] UrbanHonking.com. Among the best:KMikeyM’s experiment in being a publicly traded person and the sci-fi meets science blog “Universe” at ScienceBlogs.com.

We TRY to stay away from most food blogs, especially restaurant blogs. Total snooze. We used to religiously readIdeas in Food, but got kind of bored with all the recipes for making pasta out of weird starches and chemicals.

What are some of your favorite places to eat around town?
Leo’s Taco Truck – the taco truck in Eagle Rock that sustained us through college. Guisados never gets old. Vinh Loi Tofu – Duh. We love to play out the whole elaborate “market-driven” food at home, so when we go out we just want to eat what we consider comfort food, which usually means punishingly spicy Mexican or Southeast Asian food. Or we go to Elf Cafe.

And to drink?
Though we pine for its elder incarnation, Tony’s Saloon on E 7th St. is still a fave for a pint and pool and/or ping-pong. We’re shameless supporters of Ryan Sweeney’s joints and Verdugo Bar is still a top ranking spot for shooting our livers. Fresh pints at Eagle Rock Brewery are always on our collective mind (especially if Mandoline Grill is parked outside).

What do you feel is the most exciting thing happening in the local food scene right now?
Yikes… It’s STILL exciting that Angelenos are really pumped about buying food from farmers markets. The whole “food is the new rock” thing seems to really be taking off, and clearly we benefit from that, but what’s so much cooler than food being cool is people respecting who MAKES their food. The more that cooks interact with farmers, the more that the act of cooking someone’s babies becomes precious. That’s what excites and drives us in what we do. We mean vegetables, not actual human babies.

Also, chef-owners: those chefs who actually are in it for the long haul and seek to build community with their shops, not just air-drop into fame vehicles.

What would you want your final meal to be? Annnd given your penchant for pairings, what would you drink with it and what would you be listening to?
Alex: Six dozen oysters and a six-pack of Green Flash’s Rayon Vert. Preferably consumed atop Strawberry Peak, naked, while listening to “Ride Into the Sun” by the Velvet Underground.

Evan: Three fried-egg sandwiches on rye, smeared with hot sauce and wilted greens. A bottle of Pliny the Elder and Mazzy Star’s “Fade Into You.”

The Best Vegan Restaurants in L.A.