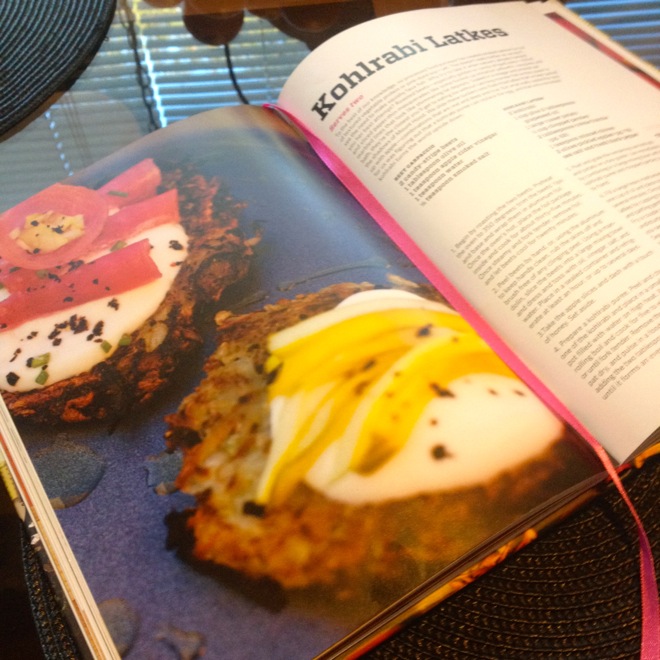 Our favorite veggie bloggers, The Hot Knives, bring a double-edged sword to the holiday table, with a recipe for kohlrabi latkes that puts a wonderfully inventive spin on Hanukkah’s traditional potato pancake PLUS a “White Christmas” beer and cheese pairing event at Eagle Rock Brewery.

On the jolly St. Nick side, the blogger boys have quite a few white beers and cheesy goodies up their sleeves for you to try, and at $29 per person, it’s a steal. Per the lovely Ting Su at Eagle Rock Brewery:

And on the menorah end of the equation, Hot Knives still got ya covered, with this awesome gem:

Directions:
1. Begin by roasting the two beets. Preheat the oven to 350°F; trim the beets’ tips and base and wrap them in aluminum foil. Once the oven is hot, place the foil package inside and cook for about 35 minutes. Once steamy and fork tender, remove foil, and let beets cool for 20 minutes.

2. Using the aluminum foil to keep your hands clean, rub the skins off and brush the beets free of any clinging peel. Using a mandoline, thinly slice the beets into a large mixing bowl and dress with oil, vinegar, salt, and water, tossing to combine. Place in a sealed container and refrigerate at least an hour, or up to several days.

3. Prepare a kohlrabi puree. Peel and chop one of the kohlrabi and place in a small saucepot filled with water on high heat. Bring to a rolling boil and cook for 5 to 8 minutes, or until fork tender. Remove the kohlrabi piece, pat dry, and pulse in a food processor while adding the two tablespoons of grapeseed oil until it forms an evenly whipped puree.

4. Peel and grate the remaining raw kohlrabi and potato on a box grater. Use immediately to prevent browning by combining with the cooked kohlrabi puree and chopped parsley in a large bowl. Mix well by hand.

5. Fill a very large, heavy-bottomed pan with one cup of oil and place on high heat for several minutes. Once hot, form a couple latkes by cupping together with your hands and patting gently to form a 1/2 inch-thick cake. Fry a couple at a time, letting them cook undisturbed for 2 to 3 minutes or until you see the potato shreds browning nicely. Season liberally with salt and freshly ground black pepper. Flip gingerly. After cooking another 2 minutes, flip once more to ensure they’ve cooked evenly without burning. Remove and let cool on a paper towel. Repeat until all your latkes are done.

6. Plate the kohlrabi latkes and top with a dollop of crème fraîche, 1 or 2 slices of beet carpaccio, and applesauce. Garnish with minced chives.

Directions:
1. Wash apples and pat dry. Slice each apple lengthwise into 6 to 8 round slices, flicking the seeds out of the middle. Arrange the slice in a clean, quart-sized jar.

2. Prepare the pickling liquid. Bring the water to a boil in a medium-sized pot.

3. Meanwhile, slice the jalapeño lengthwise, from the stem to the tip, into four long slivers and break the cinnamon stick in half. Place the jalapeño, cloves, and cinnamon pieces into the jar.

4. Once the water hits a rolling boil, add the apple cider vinegar, salt, and sugar. Stir to dissolve, then quickly pour over the apples. The liquid should cover them. Place a small saucer or ramekin on top of the apples to limit their exposure to the air. Place in the fridge for at least one day and use within 3 to 4 weeks.