Home Uncategorized Guide To Grilling: The Best of All Worlds 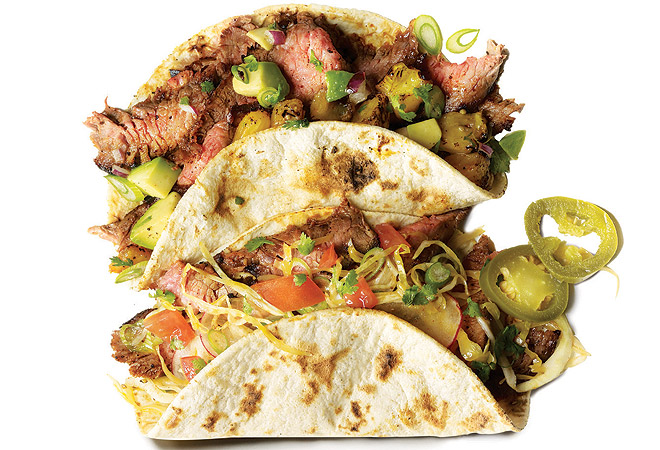 Korean
By Roy Choi (Chef, Kogi, A- Frame, Sunny Spot)
Korean BBQ is all about thin cuts and fast cooking—basically the opposite of American barbecue. Here in the U.S. you’d never take a $50 28-day dry-aged steak from Harvey’s Guss Meat and slice it into credit card-size portions—but Koreans don’t give a f——. Sliced thin, that same steak can feed four people, so it’s more affordable and you’re tasting the meat more fully. The main cuts are galbi, which is short rib; samgyupsal, or pork belly; and bulgogi, which is marinated top round, shoulder, or brisket. At most Korean markets you can find these pre-sliced and marinated.

Latin
By Bill Esparza (Food Blogger)
Carne asada may be the standard Mexican birthday party fare, but that doesn’t mean it’s not serious business. Asar means “to roast,” so carne asada should only be cooked over a fire, and to be truly authentic it must be prepared with mesquite. Thick cuts of steak like New York, top sirloin, rib eye, and arrachera (Mexican-style flank steak) are seasoned with coarse salt before cooking. While not traditional, marinated cuts can be found in a pinch at your local carnicería. Serve the meat along with flour tortillas, frijoles maneados (beans refried with lard), salsa, and roasted Anaheim peppers. In Argentina asado (barbecue) is a gaucho way of life. Local hardwoods are burned to make coals for the fire, and chorizos, blood sausages, sweetbreads, and asado de tira, or ribs, are cooked over the embers along with whole vegetables and served with simple salads and a drizzle of tart chimichurri. Large cuts are presented intact for sharing over generous pours of inky malbec.

Japanese
By Kuniko Yagi (Executive chef, Hinoki & the Bird)
Japanese barbecuing uses charcoal that burns at a high temperature without too much smoke. Binchotan is the finest Japanese kind, but it’s almost impossible to get here. You can buy mixed binchotan charcoal—use just a few and supplement with regular briquettes. Arrangement is key: You need a hot part, a warm part, and a resting area. Use skewers for yakitori, and note that a burned skewer is a sign of a bad chef.