Home Uncategorized Is That a Carrot, or is Chef Neal Fraser Happy to See... 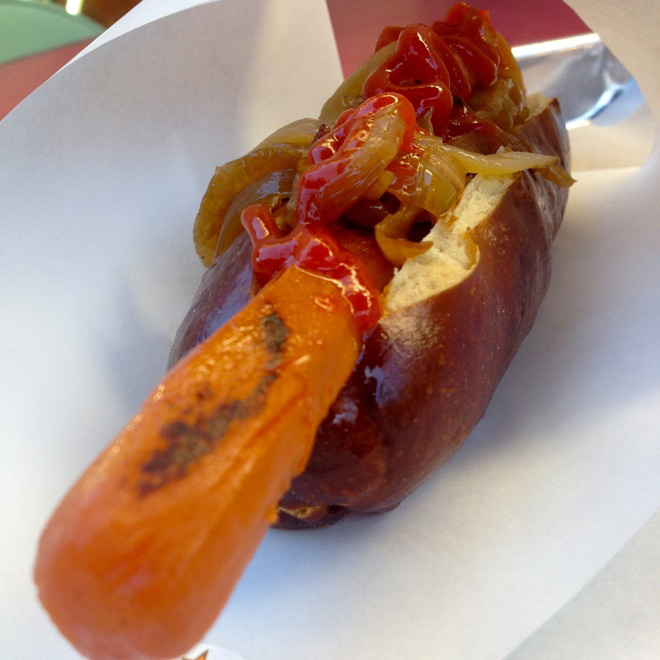 Chef Neal Fraser (Grace, BLD) opened the artisan hot dog shop Fritzi Dog late last year at the Original Farmers Market on 3rd and Fairfax. Dine editor Lesley Suter previously went down to try out all the meaty offerings (like the namesake “Fritzi Dog” made with beef and pork merguez, and the turkey and duck “Bird Dog”)… whereas I wanted to check out the “Veggie Dog.”

And oh how delighted I was to find that it was actually a veggie rather than some overly processed soy turd! Sure the menu clearly stated “veggie carrot dog” but I have to admit, I wasn’t expecting a giant carrot in a bun. Nor would I think a giant carrot in a bun would be tasty, but I was most pleasantly surprised.

But how do they do it? A Fritzi Dog rep tells me that their veggie dogs (and yes, they’re 100% vegan) start with huge organic carrots that are whittled down to a diameter of 27mm and marinated in a blend of 35 spices. They are then cooked sous vide overnight at 190°F, a process that “breaks down the cell walls [of the] carrots, but keeps them from getting mushy.” Then, they are cooked on the grill to order, giving a little snap and some nice browning on the outside.

I tried mine on a pretzel roll with grilled onions and Sriracha ketchup (those that know me would expect no less), and devoured it happily. So nice to find a veggie dog actually made from a veggie!