Home Uncategorized *Fresh Guacamole* Gets an Oscar Nomination; Q&A with the Local Filmmaker Behind... 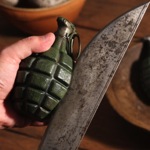 When the recent Oscar nominations were announced, we were stoked to find “Fresh Guacamole” from Santa Monica filmmaker PES got a nod in the animated short film category. We reached out to PES (a nickname he’s adopted from his full name—Adam Pesapane—though he claims only his mother calls him that) to learn more about him and the inspiration behind his 1:40 stop-motion opus.

Where did you first get the idea for the “Fresh Guacamole” video?
Back in 2008, I’d made a stop-motion video called “Western Spaghetti” that played on making food from counterparts of real-life objects, which sort of gave me a good template to use for “Fresh Guacamole.”

Ever since I can remember, I’d always thought that avocados looked like grenades. And when I was growing up, if I was in a grocery store and saw a pile of avocados, I’d have this silly thought that these little grenades could blow up the whole produce department.

How long did the film take to put together?
About four months altogether, shooting it over the course of five weeks, which is a pretty short timeline for me. Yes, it’s a very short film, but with stop-motion animation, so much time is spent with me holding my hands still like a statue while my co-animator captures the shot. “Fresh Guacamole” amassed 3.5 million hits in the first four days after being uploaded. Any thoughts as to why it took off the way it did?
Well, [cable network] SHOWTIME commissioned this one for their “SHORT stories” series, which I’d done previous short film for, so we kind of had a bit of a built-in audience there. And with all my shorts, I focus on actually keeping them short and re-watchable; a three-minute video can feel like an eternity if it’s a minute too long.

I really liked that you used game pieces like poker chips as tortilla chips and dice to represent diced tomatoes and onions. Very clever and funny.
Thanks. There’s definitely a “play with your food” message I wanted to convey.

Where were you when you found out about the Oscar nomination?
Sleeping actually. I’ve got a three-year-old, which makes sleep precious, so I usually turn my phone off at night. When I woke up, I turned it on, and it sounded like I’d won on a slot machine, with about a hundred congratulatory text messages all pouring it at once.

Any local restaurants that serve up stellar guacamole in your mind, or are you more of a DIY guacamole master?
I pretty much make my own guacamole. I love cooking, which is why I think I enjoy making these videos about food and being in the kitchen. You know, I can’t remember the last time I ordered guacamole at a restaurant, but when I do go out for Mexican food, it’s often at Don Antonio’s in West L.A. on Pico.