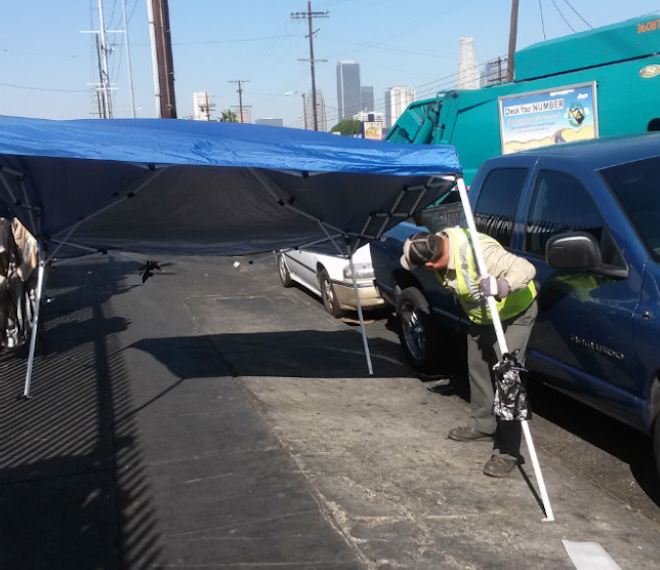 When I read on Page Six that Anthony Bourdain was working on a Singapore-style hawker center in New York, my thoughts turned to L.A.’s street food scene. We’ve got some unfinished business to do here in order to support our street food vendors. Despite the popularity of sidewalk food vendors in Los Angeles, our local government has only been an obstacle to our pursuit of street food happiness.

Los Angeles Police officers in both plain clothes and uniform have lately been issuing some of the city’s best street food vendors fines of up to $1,000. Most people don’t know that they bring a garbage truck along to destroy tables, street food carts, and any other equipment used by vendors. Instead of enacting legislation that adapts to the city’s needs, the LAPD has been tasked with enforcing laws that don’t take livelihoods into account. Lately, the LAPD has stepped up its enforcement.

A few months ago, I witnessed officers at the Mercado Olympic after a bust bragging and joking openly about how many street food rigs they had destroyed in front of downcast working families. They continued to approach random people along the sidewalk, inquiring about their reason for standing or walking by.

Back in November, the city was optimistic after hearing that councilmen Curren D. Price, Jr. and Jose Huizar were working on a motion to legalize street food in L.A. Although details have not been made public, the LAPD’s recent actions have undermined the spirit of Huizar and Curren’s public appearances with organizations such as the East LA Community Corporation.

Considering the positive movement towards embracing street food nationwide (thanks, Tony), and our own irrepressible tradition of itinerant vending, it is troubling to have witnessed the police crackdown on the Mercado Olympic in the last few months.

While street vending is illegal in L.A., such zeal by the LAPD could be better spent doing outreach to prepare for the new regulations because the people have spoken: L.A. loves street food.

LAPD Reports a Sharp Increase in Violent Crime. So What’s Behind It?