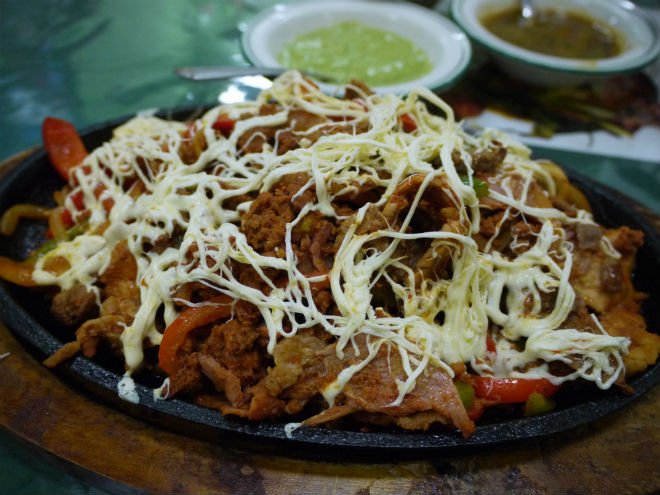 L.A. could use more of Mexico’s rich varieties of DIY tacos—cazuelas (traditionally served in a clay casserole dish), or alambres—Mexico’s answer to a hash. Fortunately, Oaxacalifornia always comes through in this department. You’ll find alambres, which in some parts of Mexico looks more like shish kebab, but in most places is a sauté of meat, peppers, onions, cheese, and just about any ingredient one’s heart desires—including bacon!

Sabores Oaxaquenos is the Oaxacan restaurant that took over the shuttered Guelaguetza space on 8th Street. It’s one of the two principal Oaxacan enclaves that features a solid menu of popular dishes from Mexico’s most famous southern state, including alambres.

Their alambre consists of a brew of ham, chunks of beef, red and green peppers, onions topped with melted quesillo (string cheese), or Oaxacan cheese served in a cast iron fajita pan.

Make your own tacos with the stack of corn tortillas and supply of salsas and guacamole. This is a classic Mexican pub item at the 3 a.m. taqueria after-parties, where at least one of your group members misses out on the alambre because he passed out on the table.