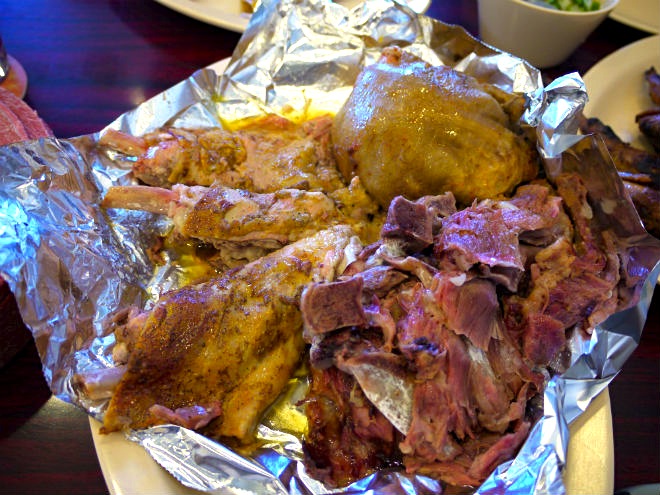 It’s official: Aqui es Texcoco has opened in the City of Commerce. The Tijuana-based Texcoco-style lamb barbacoa specialists join an elite list of traditional Mexican food purveyors that have recently opened outposts in L.A. This is the third branch of Aqui es Texcoco (there is also a location in San Diego), which began 24 years ago in Tijuana.

Owner Francisco “Paco” Perez, is a second generation barbacoa master, and student of Mexico’s pit barbecue traditions, regularly making trips to Texcoco and other cities in Hidalgo (considered to be at the forefront of this tradition), as well as several other southern Mexican states that prepare this popular weekend dish.

Aqui es Texcoco’s barbacoa tacos are the of do-it-yourself variety: Order pile of barbacoa and build a taco with bright salsas and papalo (summer cilantro) on top of hot corn tortillas for a taste of Mexico never before seen in L.A. A hot bowl of lamb consommé made from lamb drippings and a helping of pancita (offal stuffed lamb stomach) complete the experience.

Even though L.A. has plenty of barbacoa spots, I’ve been spoiled by trips to Hidalgo and frequent visits to the Chula Vista location of Aqui es Texcoco. Though you’ll find lamb barbacoa made in the style of Taxco, Guerrero; Capulhuac, Estado de Mexico; Texcoco, Hidalgo, Puebla, and Oaxaca (better known for their goat barbacoa), from here on out all of the others may as well be cooking in an empty pit.