Home Drinking Cocktails Essential Cocktails: How to Make, and Where to Find, the Perfect Sidecar 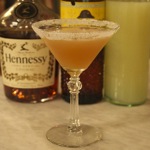 It was bound to happen: Today you’re going to add a sugar-rimmed cocktail to your growing mixmaster repertoire. But not to fear, this classic cocktail, the Sidecar, isn’t like the sugary, Sex and the City concoctions that do a number on your stomach. When done correctly, the sugar rim adds just enough sweet to counter the citrusy cocktail.

Like many classic cocktails, the Sidecar has a few different origin stories floating around; one involving an American general in 1930s Paris who would always get wasted at Harry’s Bar and need to be poured into a motorcycle sidecar to be taken home. But the simple truth is that the Sidecar cocktail is a modernized version of the Brandy Crusta, a cocktail invented in New Orleans in 1852. That’s all.

Turns out, the origin story of one of the best Sidecars in L.A. is probably more interesting. Alex Straus, of Bon Vivants cocktail consultation company and Hemingway’s Lounge in Hollywood, attributes the success of his Sidecar to a little-known liqueur called Mandarine Napoleon.

“In 1805, Napoleon Bonaparte—who was from Corsica and always loved mandarin oranges—heard about this distiller in Belgium making a mandarin liqueur. Napoleon loved the liqueur so much that he blended it with his personal stash of aged cognac and they continued making this for years but it wasn’t available to the public until 1892.”

1) Take one lemon, cut a nickel-size slice of peel from the citrus for a focused work space. Wipe the exposed piece of lemon on the outside rim of the glass only, then lightly touch the rim to the sugar, coating the outer edge of the glass with an even width of sugar.
2) Put the sugared glass in the refrigerator. “You want the sugar to dry so it’s not adding so much sugar to each sip.” Best to refrigerate the glass for two hours.
3) Combine all three ingredients in a shaker and add ice.
4) Shake vigorously. “How long depends on how vigorously. I like this drink cold. Your sweetener is also alcohol based. You’re going to want more dilution because you don’t want that strong of a cocktail.” But on average shake for 10 seconds.
5) Then double strain your drink (using a standard Hawthorne strainer and a fine-mesh tea strainer) into the chilled, sugared glass. “Any good home bartender should have a double strain because you’re really thinking of your guest if you’re taking those ice chunks out of a strained cocktail.”

More Info:
Unable to get your hands on Mandarine Napoleon? Cointreau or Grand Marnier will work just fine, but Alex highly recommends giving the Mandarine Napoleon a try.
If DIY isn’t your MO, here’s where you can find some of the best Sidecars in Los Angeles.