Home Drinking Cocktails Essential Cocktails: How to Make, and Where to Find, the Perfect Sazerac 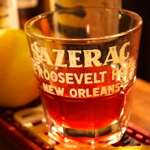 If you want to serve a cocktail that’ll make for a good show, fix up the Sazerac. The fact that this classic cocktail uses absinthe and has an origin story that everyone can actually agree on to go along with its strict ritual, makes it the perfect drink to impress your date back at your boudoir/lair. Right up there with the Old Fashioned. (Heyyy, Ryan Gosling.)

And Eagle Rock cocktail geek Chuck Taggart of GumboPages.com knows all about the Sazerac. Being a native New Orleanian, his love affair with New Orleans’ official cocktail began in 2000 when he and his partner Wesley went on the hunt for the best Sazerac in the Big Easy. Whether they found it after the 15 or so examples they tried is up for debate. But that dizzy day set off a love affair with the cocktail.

For his research, he immersed himself in cocktail historical literature, interviewed preeminent cocktail experts like “Dr. Cocktail” Ted Haigh, Robert “Drink Boy” Hess, and Gary Regan and went on to taste A LOT more Sazeracs. In the end, Chuck has fine-tuned a recipe that I consider one of the best; I admire the amount of research that went into it, and it’s got an exceptional balance of flavors that respects the cocktail’s tradition. But, before we get to appreciating the flavors of the Sazerac, let’s get to know a bit about its history.

The predecessor of the Sazerac was a simple brandy toddy, popularized in New Orleans in 1838 by Creole druggist Antoine Amadie Peychaud, who served up the cocktail with his family’s bitters. By 1850, the Sazerac cocktail as we now know it was standardized at Merchants Exchange Coffee House (really a saloon) on Exchange Alley, using a few drops of absinthe “to give it a few more layers of flavor.” The coffeehouse’s owner, Sewell Taylor, was also a liquor importer whose most popular product was the Sazerac-du-Forge et Fils cognac which was used in the cocktail. Eventually the name of the coffeehouse changed to Sazerac Coffee House with its most requested drink taking on its name as well. But thanks to the changing tastes of Americans, who preferred American rye to French brandy, the cocktail was most often made with rye whiskey.

While you can offend a Manhattan drinker by shaking the spirits-only cocktail, you can wrong the Sazerac lover by committing any of the following sins: make it too sweet, serve it with ice, drop the lemon peel into the drink, or use any bitters other than Peychaud’s. (Though adding just a drop of Angostura bitters in addition to the Peychaud’s will open up the flavor significantly.)

But that’s getting a little ahead of ourselves. First, here’s Chuck’s recipe.

Generous barspoon (roughly one teaspoon) of simple syrup (made with demerara or turbinado sugar at a 2:1 sugar to water ratio) or 1 sugar cube
4 big “slugs” of Peychaud’s bitters (“Slug that bottle from the elbow.”)
2 ounces rye whiskey
2 or 3 dashes of absinthe
Lemon peel

1) Start with two Old Fashioned glasses. (No mixing tins!) Chill one in the freezer, and use the other glass to mix the drink while the other is getting frosty. (If you’ve got a bit more time in between now and when you’re drinking, feel free to chill both glasses.)
2) Drop in simple syrup and bitters. If using a sugar cube, also drop in no more than a half an ounce of water to help dissolve it.
3) Pour in the whiskey and a scoop of ice cubes and stir for 20 to 30 seconds. If the ice is wet, stir for less time. With hard, non-wet ice, do it for 30 seconds. “You should be able to taste the whiskey. It’s a strong drink, so be careful to not over-dilute it [while stirring with the ice].”
4) Get the chilled glass and put in 2 or 3 dashes of absinthe. Rotate the glass to evenly coat it with the absinthe. You can choose to toss out the excess or keep it, depending on how much of that anise flavor you want in your cocktail.
5) Strain the whiskey from the mixing glass to the chilled glass using a julep strainer.
6) Squeeze the lemon peel over the glass and wipe the rim with it, but for god’s sake DO NOT drop it in. As Stanley Clisby Arthur, New Orleans author, says in his 1936 book Old New Orleans: A History of the Vieux Carre, Its Ancient and Historical Buildings, “Do not commit the sacrilege of dropping it into the drink.” Basically you don’t want to throw the balance off and let it get too lemony.

More info:
Even though Chuck is particular about the traditions of the Sazerac he does prefer to use simple syrup instead of actual sugar cubes like they must have used in the old days for the fact he doesn’t like the texture. However, he opts for the demerara or turbinado sugar because of the little bit of molasses that would have been present in the sugar during the 1800s of the cocktail’s heyday.

Also, if you’re going to add cognac, Chuck recommends trying half rye and half cognac. If you’re going for an all-cognac recipe, use an orange peel instead of lemon.

With regards to using absinthe versus Herbsaint, the original cocktail was made with absinthe til the green spirit was banned in 1912. And Herbsaint, created afterward as its legal substitute, “is perfectly good.” But if you want to be authentic, stick to the Green Fairy.

Even though Chuck usually makes Sazeracs at home, he does have his favorites out in L.A. like “any place Marcos Tello is behind the bar.” He also noted The Parish, Seven Grand and Justin Pike at Tasting Kitchen for their amazing Sazs.

However, I have to include Las Perlas’ Raul Yrastorza who claims to make one of the best Sazeracs around: “one that is stirred real cold but then poured into a warmed glass where the absinthe rinse was previously lit afire and then extinguished and dumped. I believe that it mimics the warmth of your hand and that warmth opens up the flavor a of the sazerac and orange oils.”