Home Uncategorized Essential Cocktails: How to Make, and Where to Find, the Perfect Paloma 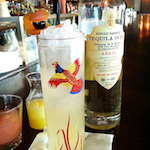 The Margarita is America’s favorite tequila drink, as evidenced in happy hours and chain Mexican restaurants everywhere. But for this special Cinco de Mayo edition of Essential Cocktails I thought it best to showcase Mexico’s favorite tequila cocktail, and a sadly overlooked one in the States: the Paloma.

As with many classic cocktails, no one knows who invented this refreshing grapefruit-tequila concoction. Not even cocktail historian David Wondrich. All we got is that its name means “dove” in Spanish. But what is known is that it’s the best-selling cóctel south of the border. “The popular drinks in Mexico are Palomas and Buchanan’s blended Scotch whiskey with Topo Chico mineral water on the rocks,” confirmed resident Latin-American food blogger and frequent traveler, Bill Esparza. However, down there you’d ask the bartender for a “Refresco de Toronja con Tequila” or “Squirt con Tequila.”

For a lesson in how to make the perfect Paloma I sought out bartender Pablo Moix (Pour Vous, Black Market Liquor Bar and the upcoming Old Lightning). Pablo admits that when growing up he hated grapefruit. It took this cocktail to make him fall in love with the bitter fruit, which is now his favorite citrus.

Funny enough, his recipe was perfected by accident. Several years ago while working at a hotel bar he mistook the label on the soda gun for lemon-lime soda when it was actually tonic. “Some people use lemon-lime soda to brighten up the drink but when I put in tonic by accident it was great. And I was like, ‘This is where I’m going with this thing from now on.’ It was an accident gone right.” Pablo’s partner in cocktails, Steve Livigni, who was also there for the lesson, offered up an explanation that the quinine in tonic water echoes the bitterness of grapefruit. “Tonic pushes that bitterness forward, while soda just waters things down.”

And instead of going with Squirt, the soda used in Mexican Palomas, he wanted to create a crafted version. (Plus Squirt in the States is drier and not as sweet as its cane syrup compadre.)

1) Add first four ingredients to a shaker and dry shake (without ice) for 3 seconds just to mix up the ingredients. The superfine sugar won’t take that long to dissolve.
2) Pour into a Collins glass.
3) Top with tonic water and add ice. Pablo fills the glass with ice cubes so that dilution is slow, but tops off the glass with crushed ice for presentation. At home, ice cubes will work just fine.

Pablo and Steve were kind enough to translate this crafted Paloma to serve 10 people, as well as share how to serve up cheap and easy Palomas for your Cinco de Mayo blowout.

1) Combine first four ingredients in a pot or large container and whisk til sugar is incorporated.
2) Add tonic water then gently stir with a whisk. Don’t whip it too hard, you don’t want to lose the carbonation.
3) Transfer to pitchers filled halfway with ice. “Then just start pouring it out, and refill your pitcher real quick.”

For 30 revellers, you can create a Paloma party bar. Just set out a bottle of tequila, a six-pack of your favorite grapefruit soda*, a bowl of quartered limes, a bowl of kosher salt and a bucket of ice. Everyone can assemble their own cocktail by pouring two fingers of tequila (“Or as much as you can handle”) in a glass, dropping in ice, topping with the grapefruit soda, squeezing the lime wedge and adding a pinch of salt. Party on!

* The boys prefer Jamaican soda Ting as “it’s what you imagine grapefruit to taste like,” bitter and not sugary.

Pablo opts for anejo in this recipe as blanco/silver comes out too sharp in the cocktail while the aged tequila “makes the drink nice and rounded and clean,” The use of a higher-proof anejo allows the tequila to shine through. “How many times have you heard people say, ‘This tastes really nice but I can’t taste the alcohol’? I want it to be really nice and you can taste the alcohol.” By the way, this is why you don’t need to use salt in this recipe. “When you’re using good tequila, you don’t need salt,” he said.

If you don’t feel like making this super-easy drink yourself, check out Bill Esparza’s list of pocho-approved, paloma serving spots around town. Addtionally, consider hitting up Guelaguetza, Las Perlas, El Carmen and 320 Main for some darn good Palomas. Steve Livigni also swears by La Cita, where day drinkers knock back Palomas and Micheladas on the patio.