Home Drinking Cocktails Essential Cocktails: How to Make and Where to Find the Perfect Old-Fashioned 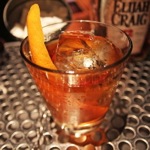 You like drinking, sure, and maybe you even have a few favorite cocktails that you like to order when out and about. But do you know how to make ’em for yourself at home? If not, stay tuned because over the next few weeks I’ll be spotlighting a few essential cocktails with which to start your home bartending career. Nothing crazy complicated, but rather, classics that everyone should have in their back pocket. I wager that after you’ve got these down, your friends will be asking you to bartend at their parties….Um, OK, so maybe we won’t tell them about your new skills. And for the non-DIYers, I’ll include *THE* places to get the best example of the spotlighted cocktails.

Fortunately for you, this artifact of cocktail history is easy to make at home. Unless, however, you subscribe to the muddled-maraschino-cherries-and-orange variety that’s popular in sports bars and other not-good cocktail bars. THAT recipe came a bit later, around Prohibition, when folks had to come up with a way to make their bathtub-spirit-based cocktails more palatable. But nowadays since we have plenty of quality bourbons at our disposal, you’ll want to do the original recipe to showcase the spirit.

The Old-Fashioned has seen a resurgence in popularity just this past decade thanks to the classic cocktail trend and also TV show Mad Men. (Although, for the record, I don’t like Don Draper’s version of the OF. Too much club soda!) But what’s interesting is that even though the recipe is simple and straightforward, you’ll most likely encounter a different version in every bar. Some bartenders do it with a lot of club soda, others with a lot of sugar.

For the best Old-Fashioned in L.A., though, I knew right away I’d have to go to Eric Alperin. Not only is the former New Yorker taking care of business at The Varnish downtown (named the “Best American Cocktail Bar”), but he also taught “my future husband” Ryan Gosling how to make the world’s sexiest Old Fashioned for the movie Crazy, Stupid, Love. He says his bar isn’t trying to reinvent the wheel, just help it turn again, and for that it is the go-to spot for any well-made classic cocktail from the 1800s to the 1960s. His bartenders concern themselves with every detail, from how polished the glassware is to the size of the ice to the near-historic accuracy of the drinks.

Eric’s Old-Fashioned recipe demonstrates a respect for this tradition as well as the cocktail’s origin, which is guessed to have come from a Kentucky bartender’s effort in 1870 to please bourbon purveyor Colonel James E. Pepper, who then introduced the cocktail to New Yorkers. The Varnish’s Old-Fashioned is closer to the original because the bar uses block ice, a sugar cube as opposed to simple syrup, and bourbon because that’s how Colonel Pepper liked it.

Its perfection evolves gradually. “What’s great about the Old-Fashioned is that I feel like it’s a drink you get a relationship with. It’s like a cigar. When you light a cigar it’s not in its perfect spot. Only 10 minutes later you’re like, ‘Yeah, that’s where I want my cigar to be.’ I think an Old Fashioned is similar because this hand here that we all grab our glass with, it’s a 98-degree heater. That’s going to warm up that cocktail, and it’s going to add dilution to it. So you don’t want to serve it in, I think, the perfect diluted state. We want to let you, as the customer, enjoy that, have a relationship with your drink. And five or 10 minutes later, you start to get a little bit more dilution because of the warmth of your hand. And you can sip that drink for 20 or 30 minutes and really enjoy it.”

The club soda here doesn’t contribute to the cocktail’s dilution but is only used to make a paste of the sugar cube and Angostura bitters. “You’re literally pouring it on a barspoon and making a paste,” Eric says. “It’s just a dash of soda, that’s all.”

Eric prefers using a sugar cube to simple syrup, not only because it’s historically correct but because he also appreciates the texture. For him, making the paste is an important part of the Old Fashioned process. “It’s not like making simple syrup. You’re actually combining the bitters and the sugar in a way that can integrate itself with the whiskey to achieve balance.” FYI, he uses the smaller Domino Dots sugar cubes as opposed to C&H’s—it’s a half teaspoon of sugar versus a full teaspoon—making for a less sweet and more spirit-focused cocktail. Since Domino is an East Coast company, the bar orders the sugar cubes online.

1) Drop the sugar cube in an Old Fashioned rocks glass.
2) Add the dashes of Angostura bitters and club soda to the cube.
3) Muddle the now-soaked sugar cube into a paste.
4) Add the bourbon.
5) Stir the ingredients to integrate them.
6) Gently place in a large rock of ice into the glass. “Block ice is the best because you have less surface area, so it dilutes the drink slower than it would with a lot of chipped ice.”
7) Give it two or three stirs, not to overdilute it since you want its dilution to happen gradually later.
8) Garnish with a long orange peel.

More info:
“You need spirits with backbone,” says Eric. “The spirit, the sugar, the water, the bitters…it’s a cocktail that isn’t too adulterated. It allows the integrity of the spirit to shine, which is nice. And the great thing about an Old-Fashioned is you can enjoy them with an across-the-board whiskey or with a more expensive whiskey. You can have a Pappy Van Winkle Old-Fashioned if you have the money to do that.”

If you want to experience other great Old-Fashioneds in L.A., Eric likes places like Bar 1886 at the Raymond in Pasadena, Cole’s, Seven Grand, 4100 Bar, and Silver Lake’s Thirsty Crow (with the caveat “as long as they’re not too slammed”). “Of course there are other spots that have bartenders with deft hands. If you see they are using good ice and aren’t trying to fancy up your Old-Fashioned, then you’ve probably come to the right place.”