Home Uncategorized Essential Cocktails: How to Make, and Where to Find, the Perfect Bloody... 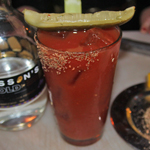 I couldn’t conclude this Essential Cocktails series without first teaching you how to make a hangover-curing cocktail. After nine classics you’re gonna need it. And yes, the Bloody Mary is strictly for day drinking. After all, it’s always best to take your vitamins, which tomatoes are chock full of, at the start of your day (and in booze form).

Legend has it that a rudimentary version of this tomato and vodka cocktail was first created in the 1920s at Harry’s Bar in Paris by barman Fernand Petiot. I like to imagine he served this savory hangover helper to an aching Ernest Hemingway, who was a fixture at the bar along with the likes of Coco Chanel and George Gershwin. After the Prohibition, Petiot moved to New York City, bringing the Bloody Mary with him. However, since New Yorkers weren’t too impressed by the then bland drink he spiced it up lots: “I cover the bottom of the shaker with four large dashes of salt, two dashes of black pepper, two dashes of cayenne pepper, and a layer of Worcestershire sauce. I then add a dash of lemon juice and some cracked ice, put in two ounces of vodka and two ounces of thick tomato juice, shake, strain and pour.”  Needless to say, the drink caught on even though Petiot’s new name for the cocktail, the Red Snapper, never did.

But Cole’s Original French Dip bartender Brent Falco, creator of one of the best Bloody Marys in L.A., believes that the cocktail was invented in, and stolen from, San Francisco and may have even been an offshoot of the sangrita, a spicy nonalcoholic sipper created in Jalisco, Mexico, to accompany tequila. This seems to be a more plausible story considering its use of tomatoes and spice, both of which California and its southern neighbor have plenty of.

Falco has a special connection with the cocktail. Born and raised in Louisville, Kentucky, Bloody Marys and Mint Juleps were the staple in the afternoon there. Her Sicilian dad was obsessed with the tomato cocktail and since they had their own garden, they always had to make it with the best ingredients.

Her Cole’s recipe is a combination of the Bloody Marys from her childhood as well as the traditional version. “But you can’t replicate ours at home because then you have to take five of our other recipes. I created it to be something special to Cole’s so all the ingredients come from our kitchen.” She does, however, provide substitute ingredients that fit perfectly. The chef at Cole’s won’t let her give away the atomic pickle juice recipe, but Falco says you can use your favorite pickle juice or pepperoncini juice. “Go to your local farmers market or gourmet store and find culinary pickles. Or even go to your favorite restaurant and be like, ‘Can I have some of your pickle juice?’”

Her recipe is in two parts: the Bloody Mary mix and the actual cocktail. The mix recipe is good for 10 people but if you want to keep it all to yourself, freeze it for use later. “The best thing about the Bloody Mary mix is that you can batch it for your friends. Think about people watching a football game together, or just having people outside by the pool during an afternoon, or you’re on a trip together,” said Falco. “You can always find the ingredients to put that together and you can choose locally where you are what ingredients you want to put into it.”

For the annual cocktail event Tales of the Cocktail, Falco makes mini bottles of her mix for friends to enjoy on the airplane on the way to New Orleans. Smart!

1) Combine the ingredients and blend it up until you get the texture you want.
2) Let the mix sit 24 hours so the seasoning and full flavor come through.

** If you want to use fresh tomatoes, get a mix of 8 to 9 heirloom, roma and beefsteak tomatoes (sweet, tangy and mild flavors). Boil them down to get the skins off or else they’ll make the mix bitter. You still need to use the can of tomato juice to balance out the acidity of the fresh tomatoes.

1) Add the liquid ingredients to a mixing tin and fill it close to the top with ice.
2) Pour the contents into a second tin and then back into the first tin. Repeat this step three more times. You do this instead of shaking it because you want to aerate it without diluting it too much. However, if you don’t feel like throwing it back and forth, a quick shake will suffice.
3) Moisten part of the outside rim of a 16-ounce glass with lemon and roll it in the spice mix. Fill the glass to the top with ice and strain the cocktail into it. Garnish with a celery stalk and a pickle.

Falco says the garnish should support what you have going on in the Bloody Mary. “Some people just throw a bunch of garnishes on but don’t pay attention to the base of the Bloody Mary mix and they think that makes it. But the garnishes have to work with the Bloody Mary. We use a celery and a spicy pickle. Our Mary starts of a little spicier than most places but if people want it spicier we just tell them to eat the pickle. And if they want to cool it down, the celery gives it that nice watery, cool-down effect.”

Falco also says that her Bloody Mary mix is perfect with tequila. “Not all mixes are but this one is just because it’s so savory.” She likes Ocho tequila for a Bloody Maria. “It has a flavor and a purity to it. You don’t get that extra sugar content.” Or for something a bit smokier, mix it with mezcal. “I would recommend Vida for that because it’s one of the best mixing mezcals. And you’re not paying the heavy price for it, too.”

And that’s just the tip of the iceberg. If you really want to go crazy you can sub the vodka with any other spirit for a different take on the Bloody Mary. Swap with bourbon and get a “Bloody Derby,” do gin for a “Bloody Murder.”

If you want to try the original Cole’s Bloody, it’s only available on Saturdays and Sundays during brunch, since they just don’t have the bar space to accommodate all those ingredients. Falco’s second favorite version in L.A. is made by Big Bar bartender Dan Long who is in love with Bloody Marys as much as she is.

For gourmet eye-openers, the “new” A.O.C. has a Bloody made with stout and balsamic vinegar, while Hungry Cat’s Maryland Mary is served with an oyster.