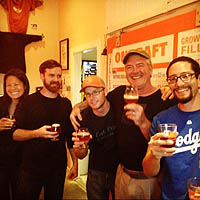 Last night, Eagle Rock Brewery—which is actually in Glassell Park—hosted a preview tasting of their brand new Imperialist double IPA and the Eradicator Bock. The tiny brewery kept its taproom open an extra hour for the occasion, and by 6 p.m. the place was packed with your typical beer fans (beards, bikes, tats) ready to guzzle the new additions by the growler-full.

The Bock was based on the winning recipe from last year’s Great American Beer Festival Pro-Am homebrew competition, and we can see why it beat out everyone else. The burly autumnal beer has a round sweetness and tastes readymade for holiday face-stuffing (AKA, it’s a great food beer). But the star of the night was the Imperialist Double IPA. Served in a dainty tulip, this 10% ABV beast has an almost tropical nose, and we overheard more than a few people use the word “pineapple” to describe it. It’s a balanced brew that belies its own booziness and goes down easy—almost too easy.

The ERB team was in a celebratory mood and were already hinting at plans for bottling this one. While you’re waiting for that to happen, you can pop by the brewery for a taste starting this Wednesday. Our advice? Walk, do not run. The brew crew said they don’t expect it to last the month.