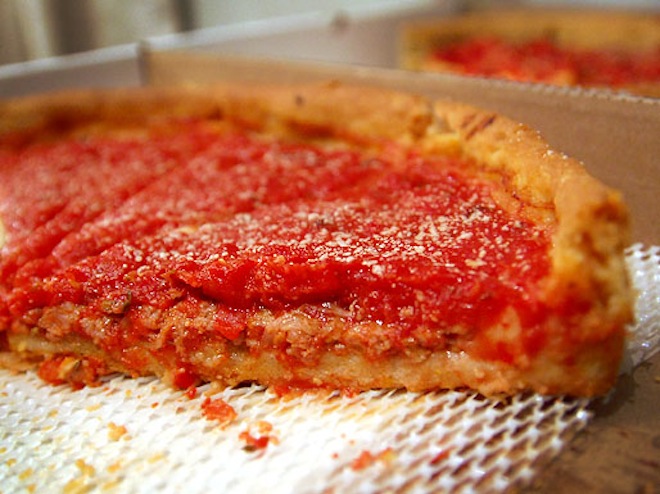 This morning, Hollywood Pies, the Pico Boulevard-based Chicago-style pizza joint that was a secret and then wasn’t a secret, announced its closure. As a born and bred Chicagoan, I shed a salty tear when I heard the news.

Angelenos are so wrapped up in their obsession with making great New York-style or Neapolitan-style pizza that they’ve missed the boat on deep dish. And, the beauty of it. Why are we so fixated on thin crust pizza anyway? Why can’t we just be satisfied with a flavorful pizza pie? Here now, allow me to clear up some misunderstandings about deep dish. If you’re a fan of thin crust, that’s fine. I am too. But if you haven’t tried to appreciate deep dish, well, that’s your loss (and I frown in your general direction).

It’s actually a pie, people, with an outer crust and at least an inch of filling. Thinking of it as a pie, not a flatbread, might ease some of your concerns about its heft (a single pizza can weigh over five pounds, not unlike a hearty apple pie).

The crust, it’s crunchy—not squishy, not spotted, not doughy, not chewy. It’s not baked at 800 degrees (that would be absurd). You don’t have to tip toe around the dough or pray to the yeast gods or get all snobby about it. You just make it and fill it with delightful things and bake it until it’s golden brown.

The sauce, it’s a thing of beauty. It’s not just crushed tomatoes and salt, it’s a simmered-for-hours marinara laden with oregano and garlic. It will last in your memory—and on your breath—for days. I still remember the taste of Lou Malnati’s sauce (rich with umami, chunky but silky, bits of dried oregano throughout) though I haven’t had it in years.

Forget rubbery discs of mozzarella—a deep dish’s soul can be found in its “lake” of molten cheese, usually a blend of ricotta and mozzarella.

It’s meant to be shared—you’re not supposed to finish an entire pie yourself. This is a beast of a meal, often enjoyed in the dead of winter, while bundled in layers, a foot of snow covering the ground outside. Chicagoans don’t do pansy anything, pizza included. If you hate yourself after eating deep dish pizza, newsflash, you probably ate too much.

Will you miss Hollywood Pies too? Do you have a bunch of cash lying around? Ownership wants to hear from you.

The Best Chicago-Style Deep Dish Pizza in L.A. Has Something Other L.A. Deep Dishes Lack