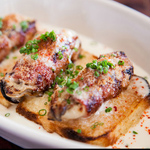 If you head to Michael Cimarusti’s striking seafood shack expecting Providence Lite, you’ll leave disappointed. The menu doesn’t offer the kind of Michelin-starred food that’s meant to wow; it’s meant to soothe. And it does, with clams, battered and fried, their bellies soft and flavorful; a massive New Bedford scallop served in the shell; and the city’s finest lobster roll. Some of the best stuff never touches Cimarusti’s hands, or those of any cook: raw oysters and clams (a broad selection) and more than 20 craft beers on tap. Desserts such as whoopie pies and blondies are a throwback. » 8171 Santa Monica Blvd., 323-848-2722 or connieandteds.com.