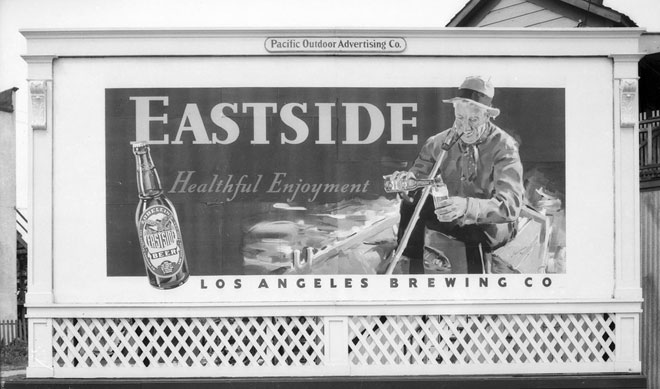 Palm trees arc across cans of Golden Road’s Point the Way IPA, and a haloed Los Angeles City Hall peeks through the logo of Angel City Brewery. As craft brewers embrace the city’s unique iconography, transform historic downtown buildings into meeting houses, and find other ways to establish a connection with Los Angeles past and present, it may be only a matter of time until one taps into L.A.’s underappreciated brewing history to revive a long-dormant local brand: Eastside Beer.

Angelenos began guzzling Eastside in 1907, after a Bavarian immigrant and veteran brewer named George Zobelein purchased the Los Angeles Brewing Company and introduced a new line of beers based on his recipes. With his brewery located on the east bank of the Los Angeles River (the present-day site of the Brewery Art Colony), Zobelein named his brews—ranging from a light pilsener to a heartier bock—Eastside. It soon became one of the town’s bestselling brands.

Eastside survived Prohibition as near-beer—beer that squeaked under the 0.5% alcohol by volume (ABV) limit imposed by the Volstead Act—and returned to its more intoxicating form in 1933. But after Milwaukee-based Pabst Company purchased the brewery in 1948, Eastside lost market share to Pabst’s Blue Ribbon and other nationally distributed beers. Pabst relaunched the brand as Eastside Old Tap—the beer sold at Dodger Stadium’s opening day in 1962—but by the time Pabst closed its Los Angeles operations in 1979, the company had retired the Eastside brand. Today it remains shuttered, ripe for an enterprising local brewer looking to capitalize on Los Angeles’ forgotten beer history.