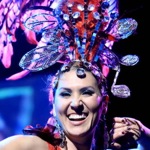 Brazil’s world famous Carnaval festivities were held in Rio de Janeiro, São Paulo, Salvador da Bahia, Pernambuco, and other cities in the northeast this past February 8-14. While Carnaval is held throughout the world—including our own Mardi Gras in New Orleans—Brazil puts down a spectacle of music, dance, sexuality, beauty, and majesty that’s without peer.

I watched jealously from afar on Globo, a Brazilian cable TV channel. They broadcast the Carnaval competitions between various samba schools in Rio and São Paulo, respectively, and they televise the trio elétrico (Bahia parade bands) and their marchers blast axé rhythms down the streets of Bahia. In case you didn’t go to Brazil—or don’t have Globo—the 13th Annual “Brazilian Carnaval: Exotica” is taking place at Nokia Live on Saturday, March 2.

The competitions at the sambadromos (samba stadiums) are amazing, but the blocos, or block parties are where the real party explodes, most famously in the neighborhoods of Rio de Janeiro. The Carnaval Exotica’s bloco party will have some of L.A.’s own titillating samba dance stars, with live music by Bloco Nove, Katia Moraes, and Chalo Eduardo’s All Star Band.

You can’t dance uninhibited without some liquid encouragement, but worry not! Plenty of Leblon cachaça (a sugarcane-based spirit hailing from Brazil) will be on hand for caipirinhas. Can’t samba? There will be lessons at the beginning of the event to loosen up those hips, and the aforementioned caipirinhas will do the rest.

In addition to dancing and drinking, Carnaval is all about Brazilian street food. Cachorro quentes (Brazilian-style hot dogs) with stick fries and a variety of toppings, and salgadinhos (little savories): coxinhas (chicken croquettes), kibes (Lebanese beef and bulgur wheat croquettes popular in Brazil), pão de queijo (cheese bread), and much more will be served at Carnaval Exotica for $3 to $5 each.