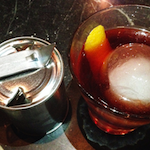 At West Hollywood’s newest restaurant The Church Key—from partners Joseph Sabato (The Bazaar, XIV), chef Steven Fretz (Top Round, XIV), and mixologist Devon Espinosa (Pour Vous, Ink)—it’s all about the dim sum-style carts. Sure, the restaurant has a printed menu for food and cocktails, but diners will want to grab off-menu items from those roaming carts. It’s easy, it’s novel, and it’s fun.

The drink carts themselves, pushed around by servers dressed in tailored Pan Am-style uniforms, are a demonstration in thinking outside the box with regards to tableside cocktails. “They literally said, ‘Devon, you have three carts, come up with something fun,’” said Espinosa. And since craft cocktails built right at your table won’t work with the whole instant delivery concept, he created liquid nitrogen cocktail popsicles, canned cocktails, and pre-constructed cocktails in mason jars.

The “Odd-er Pops” are pre-made three-ounce cocktails in those familiar popsicle bags. Just like the Otter Pops of your youth, each color is representative of the flavor, or in this case cocktail, you’re getting, like the “Yellow Polka Dot Bikini” for the Lemon Drop and “It’s Not Easy Being Green” for the Appletini. Four flavors will be available. Try them all!

The pops come to your table via an old Delta Airlines cart, at which point the liquid popsicle is given a short, smoky nitrogen bath. (The servers obviously go through several safety training sessions for this.) The entire process takes no longer than two minutes. In the end you get a slushy, boozy popsicle. The tip of the bag is cut off for instant slurping. “I think it’s fun and kitschy. Women are really loving it. We’re a family-friendly restaurant as well, so kids are loving the nonalcoholic Odd-er Pops,” said Espinosa.

And now about those canned cocktails. “We’re called the Church Key, let’s shoot for the stars,” said Espinosa. “Everyone’s bottling cocktails but why not can them? I think it’s cool, I think it’s fun, I think it’s a game changer.” The cocktails will be canned in house with a Church Key label slapped on. The cart server will either pop the can open for you with a church key or let you do it yourself. And you can pour it into a glass over ice or drink it straight from the can, like they did with flat-top beer cans in the old days.

The cans are definitely a fun cocktail delivery device, and one I think should be mass-produced. You know, for picnics and camping. And, inside my purse.

For last night’s preview, they served canned Negronis but Espinosa is planning to create canned cocktails inspired by L.A. neighborhoods. “When I was first canning cocktails I was thinking how much I love the boroughs of New York. And I love Manhattans and Bronx cocktails. So I thought, ‘Let’s create cocktails for the ‘boroughs’ of L.A.,’” he said. “One of the cocktails that’s still in development is the ‘Los Feliz.’ It’s tequila-based, with a little Cynar, a little Antica Formula, a little bit of Benedictine and bitters. I also want to do an ‘Inglewood,’ which is going to be rye, a little Becherovka, a very woody, cinnamony taste.”

The third cart idea was inspired by customers who want to shake cocktails themselves. “Everyone loves the bartender shake. Everyone’s always like, ‘Oh, can I shake that?’” said Espinosa. So he put cocktails in mason jars. The cart server will simply add ice and hand the jar over to you to either shake or stir the cocktail yourself.

The Church Key opens to the public this Thursday at 5:30 p.m.