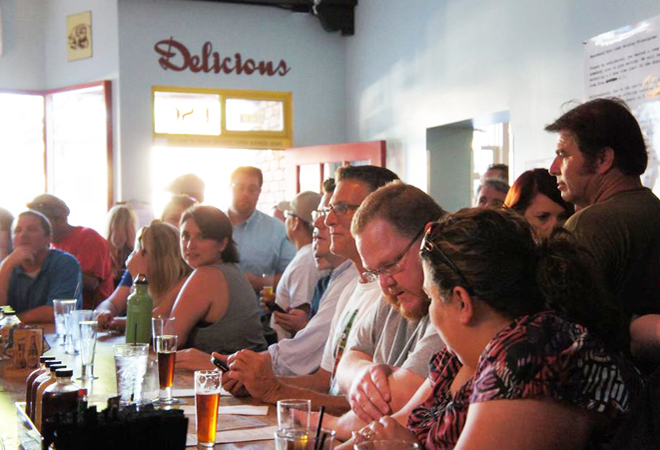 Sour beers aren’t for everyone. After all it’s a polarizing style of beer with descriptors like “funky,” “pungent,” and “vinegary.” So it’s difficult to imagine a whole beer festival dedicated to it. And yet, in Southern California, there are two that are popular among beer geeks everywhere: Stone Brewing Co.’s annual Sour Fest (this past June) and Beachwood BBQ’s biennial Sour Fest (September 3 through 8).

Beachwood BBQ’s upcoming five-day affair is more of a tap takeover than a traditional beer fest of tickets, booths, and lines. Over 100 handpicked sours, most of which have been collected and aged by bar/restaurant owner Gabriel Gordon, will flow from all the taps at the Seal Beach location and 20 taps at the Long Beach restaurant. Each night a Brewers Night will showcase a different brewery with their brewer getting behind the bar to pour and chat with everyone. This year’s breweries are from the likes of The Bruery, Firestone Walker, and Cascade Brewing. Also a free shuttle will transport drinkers from both locations Friday through Sunday.

What distinguishes Beachwood’s Sour Fest from Stone’s, an event which Gordon loves and respects, is that he ages his sours from one to four years and therefore only celebrates every other year. “The every-other-year thing allows me to collect and gather beer and age,” he said. “Because sour beer ages really well. And it ages interesting. It doesn’t have that linear down of aging. Sour beer does this change where it gets bad or good and then changes again. And so the flavors are always evolving.”

For this year’s festival there are sours that Gabriel has cellared since the first event four years ago. “I have a super deep, deep, deep cellar and we tend to bring all that stuff out for festivals.”

Since Gordon is a consummate sour beer lover, whose deserted island beer choice is Cantillon Gueuze–because it’s “really low on alcohol, very hydrating, and good for your gut thanks to all the probiotics”–I asked him for his expertise on everything from what’s a good entry-level sour to which sour is best for aging, and which beer he’s looking forward to at this year’s festival.

“On the traditional lambic side: Cuvee Rene by Lindemans. You can go to Whole Foods right now and buy it. It is cheap and it is GOOD. It’s a way to decide whether or not you’re interested in gueuze. It is a very traditional, by-the-book, stylistically correct gueuze. It tastes as it should. It’s a little funky, it’s got a little bit of apple orchard in the nose. It’s got nice acidity. It’s not overly acetic. It’s not like a beer that pulls the enamel off your teeth. It’s got some oak quality to it. It’s light, crisp and refreshing. And it’s inexpensive enough that you can A) afford to play with aging it and B) you can drink it and if you don’t like it it’s not a big deal because it didn’t cost you that much.”

“Gueuzes, which is a blend of two or three-year of lambic, are always great to age. They’re generally foolproof. It’s pretty rare when you open up a gueuze and go, ‘Ugh, something went bad in this.’ That almost never happens. And they age well and they age interesting. So gueuze from anybody you can get your hands on.”

Beers He’s Most Excited About at the Sour Fest:

“Crooked Stave is going to be coming out. Chad, the brewer and cellar master, is bringing 12 kegs out. I’ve been drinking Crooked Stave since he started releasing beers in bottles and his beers are just getting better and better. They’ve always been good but as of late…I just had some of his beer at a festival in Maine and he’s just nailing it. They’re just SO good. And they’re clean. And they don’t have any of the flaws you often get in American sour beer.”