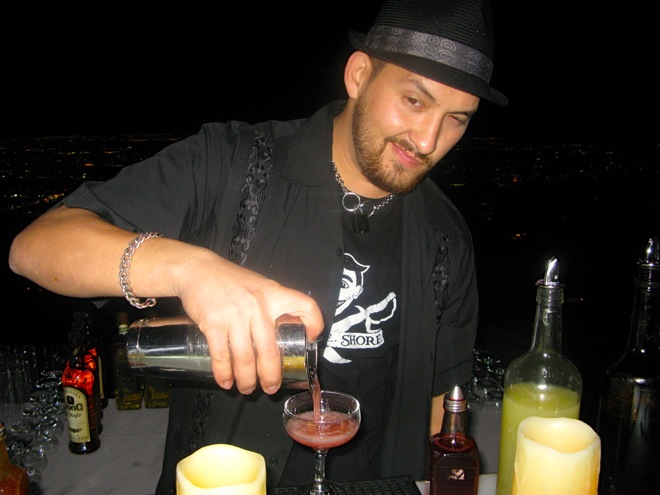 Caña Rum Bar general manager/bartender Allan Katz put the downtown rum bar on the map with its specialized rum collection and popular weekly Rum Bar Society seminars. He’s one of the original bartenders to open the bar in 2010, taking over the GM gig from Joel Black (formerly of Comme Ça and The Doheny) three months in. Cut to now and Allan has made the members-only bar, in the former exclusive Doheny Bar space, welcoming and warm, like constantly doling out drink specials (just follow him on Twitter for a heads-up) or doing contests like whoever sucks down a 19-ounce 28 Days Later cocktail on crushed ice the fastest wins a huge prize—getting their name on the chalkboard above the bar. (By the way, the quickest time was 4.5 seconds by Caña bartender Danielle Crouch’s little brother.)

Allan’s a character, and that’s evident the moment you spend a little time in his bar, or simply by reading his answers to this “Behind the Bartender” Q&A, a recurring column here on the Digest blog.

What’s a popular drink at your bar?
Brazilian Necktie. A lil’ Colombian humor there with the name… Just a spiced-up cachaça version of [The Varnish co-owner] Sasha Petraske’s Gordon’s Cup [made with gin, simple syrup, lime juice, and English cucumber], but it has created legions of addicts.

Where do you draw your inspiration from?
You. Seriously. I don’t sit around daydreaming about drinks. Folks come in and ask about a flavor or ingredient and I say, “Yeah, we can fucks with that.” Also, [girlfriend and Caña bartender] Danielle has way too many cookbooks and sometimes, fun stuff like zucchini and mint come from there.

What’s the best night to go to your bar and why?
I like Thursday. It’s laid back, but everyone’s out for the evening and looking good. Nice time to make friends.

The next big thing in cocktails is_____?
The Molecular thing (or as they prefer to call it, Modernist Technique) is coming back with a vengeance. Especially if Dave Arnold [Booker and Dax in New York] and Don Lee [PDT] take their show on the road. Their Portland Cocktail Week class was awesomely informative, painfully opinionated, and really, really funny to boot. Those steampunk-y bartenders’ll get so excited they might snap an arm garter.

What’s your hidden talent?
Julian Wayser [formerly of Caña] and I have been training a flock of hummingbirds to flap at different frequencies to play covers of Flock of Seagulls songs. It’s arduous work, but we’re trying to better society.

Where do you like to drink in L.A.?
I shoulda never told anyone about first call at King Eddy.

Where’s your favorite place to eat in LA?
It’s a tie between Tasting Kitchen and Starry Kitchen. Both places have always been damn near perfect every time we stop in, and that’s really rare. Tasting Kitchen’s got such an ill bar, but at SK I get to dine with a host who talks even more than I do. So yeah, it’s a tie.

What do you like to drink when you’re not working (doesn’t have to be cocktails)?
Gallons of coconut water to soothe my iniquities… Fresh OJ since I’m always in danger of catching something… Charbay Whiskey before bed, rum before breakfast, and Tanqueray on the rocks before lunch… Also a big believer in the Kerouac method: Demolishing a big frosty milkshake when you wake up drunk.