Home Uncategorized Art or Lawsuit: What is Dumb Starbucks? 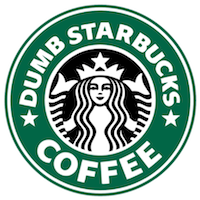 Dumb Starbucks—a social experiment, lawsuit waiting to happen, or art project—quietly opened its doors over the weekend inside an otherwise quiet stripmall in Los Feliz. Everything, from the CDs at the checkout counter to the menu board (“dumb latte”) to the employee uniforms, is identical to Starbucks’s.

Yesterday afternoon, just as the sun began to set, a line of people snaked out from the shop’s front door and around the corner. Some would-be patrons walked over from nearby apartments; others came from as far as North Hollywood and Venice to wait in line for over an hour. Why? “It’s crazy,” said one couple. “Free coffee,” said a guy who’d just come from the bar next door. Some found it funny and “very L.A.,” said a pair of girls who were visiting from Brooklyn.

According to the Los Angeles Times, Starbucks is aware of the shop and is “looking into it,” said Megan Adams, a spokeswoman for the company.

Employees inside Dumb Starbucks are just as confused as everyone else. “No, I don’t really know who owns this… My boss isn’t the owner,” said one barista. He said he found out about the job last week through Craigslist.

Unlike a real Starbucks, this coffee shop isn’t charging for drinks though employees mentioned that they might begin charging “eventually.” Pastries in the display case are wrapped in Vons packaging and were being delivered by courier throughout the day. There’s no telling how long this coffee shop will last, so if you’re curious or just want to wait an hour in line for a free dumb cafe mocha, get to Los Feliz today. The shop will be serving until 6 p.m.