Home Uncategorized Another 800 Degrees Pizza Location to Open This Fall; Get Excited, Santa... 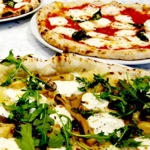 More good news for fans of 800 Degrees, the build-your-own pizza enterprise of chef Anthony Carron and Umami’s Adam Fleischman. We recently reported that the Westwood restaurant secured additional space to allow for a to-go counter, which would hopefully help alleviate some of the long wait times we’ve grown accustomed to. (Yes, it’s worth the wait, but still.)

Just in to our inbox is a press release announcing that they’ll also be opening a new 800 Degrees location in Santa Monica which may be slinging pies as early as Fall 2013:

“The Santa Monica location will have approximately 120 seats in over 5,000 square feet of space, significantly larger than the original location. Similar to the recently announced expansion in Westwood, 800 Degrees Santa Monica will have a stand-alone deli, take-out and retail space. In addition to providing take-out and to-go orders for the surrounding community, the stand alone deli space will sell branded 800 Degrees products, like Olive Oil and Peppers, alongside dry pasta, prosciuttos, cheeses, vinegars, and other classic Italian groceries. The deli at 800 Degrees Santa Monica will also sell classic hot and cold Italian sandwiches on pizza dough bread baked in the wood-burning oven. The Santa Monica location will also have its own parking with nearly 90 parking spaces.”

How to Get Your Chicago-Style Deep-Dish Pizza Fix